You are here: Home » 5 Ways to Play the G chord on Guitar 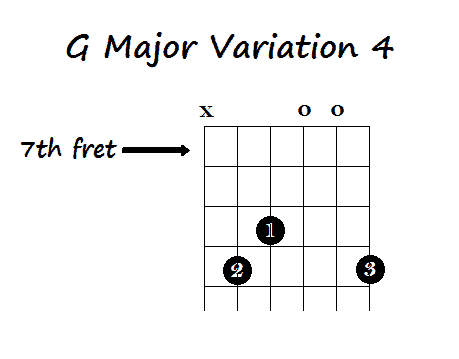 The G major chord is one of the first chords learned by most guitarists and it?s a go to in a huge number of songs.

But many guitarists only know how to play it one or two ways.

This post will show you 5 different ways to play the G chord on guitar.

This is the most common way to play a G major on guitar. You most probably already know this one but I will include it here for completeness.

The open G is played by: 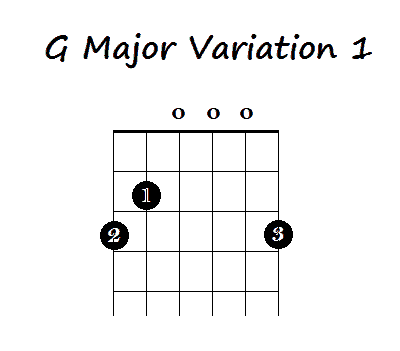 All strings are strummed when strumming this chord – so the D, G & B strings are played open.

There is a slight variation on this which is also very common. It?s the way I naturally play this chord.

I find this has a slightly ?fuller? sound to it.

The next most common version of G major is the Barre chord.

The Barre G is played by barring the 3rd fret over all the strings with your 1st finger and creating the open E shape in the 4th & 5th frets. All the strings are strummed when strumming this chord.

If you aren?t sure about how to play barre chords check out the link below.

>>How to Play Major Barre Chords on Guitar

You can also play an ?A String Barre G?. This is played by barring all but the Low E string in the 10th fret with your 1st finger and making the open A shape in the 12th fret.

Again, if you aren?t familiar with how to construct barre chords, see the link above.

This a good mid fingerboard option. 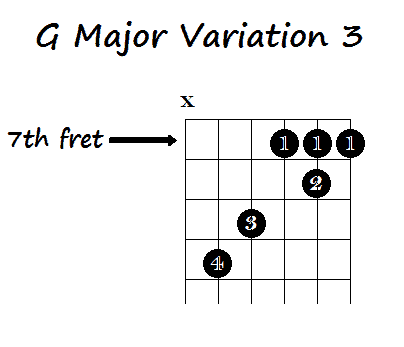 Only strum from the A string down. Don?t strum the low E string.

Some people find it easier to use the 1st finger to barre from the A string down ? this also allows you to use the tip of your index finger to mute the Low E string so you can strum more freely without worrying about hitting that Low E string.

This variation gives a G major chord option that is higher up the fretboard. It has a significantly different flavor to the Barre chord that you can play in this area of the fingerboard.

Strum all but the Low E string when you are strumming this.

This is nice easy one to finish and nice sounding (IMO). It also has a few nice variations to it ? they still keep it a G major chord but can add something extra or it can be minimized when that?s more appropriate for the sound you?re looking for.

Technically this is a G with a D bass. 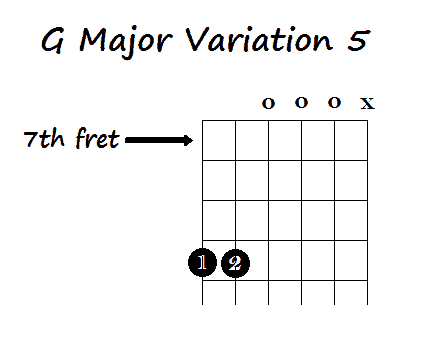 Strum all but the high e string.

There are many variations you can bring into this one. The ones that I use are:

I hope this post has given you some different options for playing the G major chord.

Do you have any other ways that you like to play G major? Feel free to leave a comment below.