You are here: Home » Alternate Guitar Tunings Chart: The Most Popular Alternate Tunings 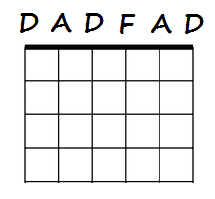 Check out the alternate guitar tunings chart below to see what some of the most popular alternate tunings are.

Then you can try out some of these for yourself.

Alternate tunings are great if:

And there could be other reasons you?d like to try out some different tunings – for example dropping the tuning to be better suited to your singing tonal range.

The Most Popular Alternate Tunings

The chart below shows the most common tunings guitarists use. Below that there is an explanation of how to tune to those tunings.

Known as standard tuning because well – this is how most guitars are tuned. This is how everyone learns when they are starting out on guitar and this is the tuning that most guitar songs are written in.

Next to standard tuning Drop D tuning is the most popular and is achieved by simply dropping the 6th string from an E down one whole tone to a D.

This tuning is used a lot in rock and metal. This is because these genres of music, very broadly speaking, use a lot of power chords. In Drop D tuning a power chord can be achieved by simply barring the 3 bass strings (6th, 5th and 4th)?on any fret.

O.k. so you probably were already familiar with Standard and Drop D tunings and are looking for something a little further from the beaten track. Below are some less common but still widely used alternate tunings.

I?ll Group these into some different categories:

These are basically just about dropping each string down. The intervals between the notes of the strings stay the same but are tuned lower.

If you want to use standard tuning but have the open notes higher, the easiest way is to use a capo – tuning up might be bad for the strings and for the neck of the guitar. Maybe half a step would be o.k. but I think using a capo is easier/better for your instrument.

If you tune down it may also be the case that?you?come across some?intonation issues depending on how far down you tune.

This is quite popular. It?s often used for those who find it easier to sing in a lower key but still want to play open chords in standard tuning.

Some people even tune down 2 whole steps! If you are tuning down to these levels it?s likely you will need to add higher gauge strings to compensate for the lack in tension.

You are also likely to run into some intonation issues and may need adjustments made to your guitar.

These usually come in the form of Drop C#, Drop C, Drop B etc.

The other common variation is double drop D or any further dropped variations of double drop D. Double dropped D tunes the high E string to a D as well as the Low E.

There are various open tunings you can try. Essentially these tunings mean that when you play the strings open they play a chord. For example open D means that a D chord will sound if you play all of the open strings together.

There are heaps of other open tunings that you can try. Experiment and see what you like.

Open tunings are great for slide guitar and are also used a fair bit in folk music – but of course there are no limits on what you can use them for.

My favorite of these here is open D minor – not because I’ve ever used this tuning but because it spells DAD FAD. which is pretty fitting for me at the moment as a lot of my friends have just become or about to become dads (including me!) – it’s a real Dad Fad (hey gotta practice the corny dad jokes sometime!).

There are a whole host of other tunings you can try out. Depending on the tuning will depend on whether or not you will need to adjust your guitar?s set up. 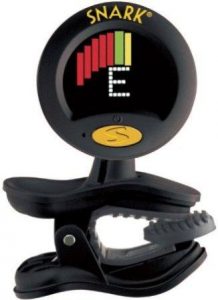 I hope this has helped you to understand alternate tunings a bit better and learn some new tunings you may not have thought of before. I encourage you to experiment – you may just fall on a tuning that you really dig.

I like half a step down myself (or Drop C#) as it suits my vocal range better – but doesn?t require any setup adjustments, meaning that I can easily switch between it and standard tuning for when I am jamming with others.

What are your favourite tunings? Leave a comment in the comments section below.

What is the standard guitar tuning?

Standard guitar tuning will read like this from the lowest to the highest pitch: E – A – D – G – B – E. This is more or less a series of ascending 4ths with the only break from this pattern occurring when the G ascends to B, itself an interval of a major 3rd. If you have played guitar for any amount of time, this tuning will be the msot familiar to you and, unless you have experimented otherwise, it might seem unfathomable to use any other tuning. If, though, you learned with another tuning from the very beginning, the same would be true of just such a tuning.

What are the six strings of a guitar tuned to?

The six strings of a guitar are usually tuned to standard tuning, a ubiquitous western style of temperament that reads from lowest to highest pitch E, A, D, G, B, & E. The foundation of this tuning is in ascending 4ths, though this pattern is broken when the G ascends to B via an interval of a major 3rd. Of course, you can tune a guitar to just about anything you can conceive of, something that bands like Sonic Youth have taken as their mission statement, taking guitar into the outer reaches of tonality and temperament. Blues musicians who are fond of using slide often tune their guitar so that it play a chord when barred with one finger. The possibilities are near endless. Even today, the guitarist from the Burkina Faso/Brussels band Avalanche Kaito is reinventing what it means to tune a guitar, playing both bass and guitar simultaneously by tuning the guitar really low.

What tuning did Kurt Cobain use?

Though quite a trailblazer in some areas, Kurt Cobain was actually quite vanilla when it came to tuning, preferring more or less to adhere strictly to either standard tuning or Drop D tuning, the latter especially on Nirvana’s final album In Utero. Of course, there is always the hidden track – remember those! – on Nevermind called ‘Endless Nameless’, where it sounds as though both Kurt and bassist Krist Novoselic are tuning their instruments up and down throughout the song to achieve a rather swampy effect.

How do I tune my guitar from C to G?

To treat your guitar in this way, you will likely want to involve a guitar tech, especially if it is your first time. Tuning to drop C or any other dramatically dropped tuning can incur serious consequences for a guitar if it is not properly set up for the cause.