You are here: Home » The Best Guitar Solos for Every Level of Guitarist

For acoustic and electric guitar players alike, learning to play solos is an exciting experience. Whether you’re a beginner, an intermediate guitarist, or an advanced player, there’s a solo out there to learn. Here a few great ones.

The Top Guitar Solos for Every Level of Guitarist 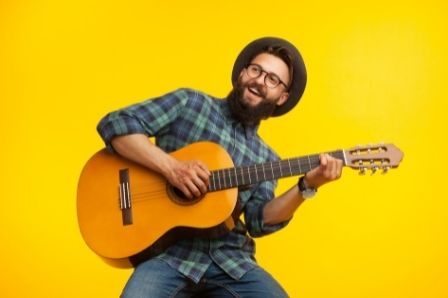 Nirvana — “The Man Who Sold the World” (Beginner)

This solo is relatively simple, and it’s a good one to start with. “The Man Who Sold the World” is actually a David Bowie song, but Nirvana’s cover (and especially their acoustic version, as shown in this video) became very popular.

The solo for this song is based on the picked acoustic riff featured throughout the song. If you’ve recent learned how to play a vibrato by string bending, this is a great solo to practice it on. You’ll also get to practice sliding down the neck and back up again.

If you want to play it like Kurt did on MTV Unplugged, you’ll need to tune your guitar a half-step down. Instead of E, A, D, G, B, E, the tuning would be E flat, A flat, D flat, G flat, B flat, E flat. Check out the tabs if you’re ready to learn it!

This solo from one of Clapton’s better-known songs is a great way to test and refine some of the most important guitar techniques. You’ll use hammer-ons, pull-offs, and of course, some soulful string bends. It’s commonly played on an electric guitar, but it’s a great solo to learn for an acoustic guitar, too. This video shows you the acoustic version.

The “Layla” solo starts out fairly easy, but it gets more challenging as it goes. It’s a good idea to learn it piece by piece. Make sure to master it slowly at first — speed will come as a by-product of good technique. This video shows you the tabs and offers a great close-up view of an example solo.

This song is undoubtedly a classic, and part of its lasting acclaim is thanks to its impressive solo. That solo can be played acoustically or electrically — check out this video of an unplugged version. Part of what makes it challenging is the fact that it switches between several different scales.

Knowing your scales and modes can help you better understand how all of the notes work together, but switching between them can be tough even for advanced guitarists.

Like the “Layla” solo, this one will also test your ability to use different techniques. There’s plenty of string bending, sliding, and vibrato involved. And like most complex solos, breaking this one up makes it a lot easier to learn. This video breaks it into manageable parts and includes a helpful tab.

Learning some of your favorite solos is a great way to better understand your instrument (and even to write your own solos if you want). Always make sure to challenge yourself while still remaining patient, and you’re sure to develop as a guitarist.