You are here: Home » Can You Plug Headphones Into an Electric Guitar? [Answered]

Well, well, well, are you frustrated with how loud the guitar can be? Are your housemates and/or neighbors just as, if not more, frustrated by all the noise and hubbub that comes from your house all the time? Are you simply looking to practice guitar quietly and establish some peaceful ground rules in your abode?

The answer is no, the guitar’s output jack is constructed to accommodate these 1/4 inch jacks, and thus will not fit the typical 3.5mm cable of a typical pair of headphones or earbuds.

Well, look no further, as today we will be elucidating for you precisely how to plug headphones into your guitar via the use of a series of intercessors that do the work of translating the raw sound from the guitar into interpretable sound by the headphones.

Well, Can You Plug Headphones Into a Guitar?

Not directly, no, and this is in much the same way that you can’t exactly plug a guitar directly into a computer without an intercessory of some sort to do your bidding. The most obvious sign that your guitar cable and computer are incompatible will be the fact that they simply will not fit in the headphone jack.

Untold damage will be brought down upon the computer without a go-between, for their headphone input jacks are not designed to accommodate the 1/4 inch jacks typically used to transmit sound information from guitar to amplifier.

And the same goes for the reverse, of plugging headphones into a guitar. The guitar’s output jack is constructed to accommodate these 1/4 inch jacks, and thus will not fit the typical 3.5mm cable of a typical pair of headphones or earbuds. And, even if the headphones do use a 1/4 inch cable instead, the pure signals from the guitar will not be transmitted directly.

Hence why some guitarists are fond of mini amplifiers that you can plug into the guitar and which you can plug headphones into, so that you can fully realize whatever reasoning you initially had for wanting to use headphones while playing guitar. Some of these do not even sound at all far from a real amp. 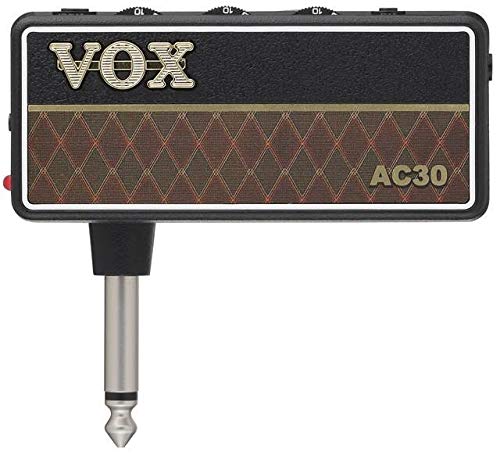 How Can You Plug Headphones Into a Guitar, Then?

We have already elucidated upon the mini amp, a key proponent of which is none other than the esteemed amplifier brand Vox. Below, you will find a few other key methods and intercessors between guitar and headphones that are sure to enable you to realize any reason you might have for doing so in the first place.

The first affirmative answer to can you plug headphones into a guitar comes in the form of the guitar amplifier. Most modern guitar amplifiers are perfectly up to the task of acting as a conduit between the guitar’s tones and your own ears.

In this way, most modern guitar amps will have a headphone jack. Even some more vintage examples of guitar amp boast a headphone out port, though the modern examples of the form will exchange what would have been a 1/4 inch jack headphone port for an auxiliary jack that is more likely going to fit the headphones or earbuds that you are using.

Any audiophile will tell you that there is some advantage to fidelity when using and transmitting sound via 1/4 inch jack, though there is scarcely much difference, especially when the sound is direct input guitar.

If your amplifier is one of those older versions that uses the 1/4 inch jack, you can either purchase a pair of headphones specifically for the purpose (and believe me there are still plenty of them around), or you can purchase an adapter for almost nothing online, allowing you to plug any wired headphones you have, and most importantly allowing you to listen to electric guitar with headphones. 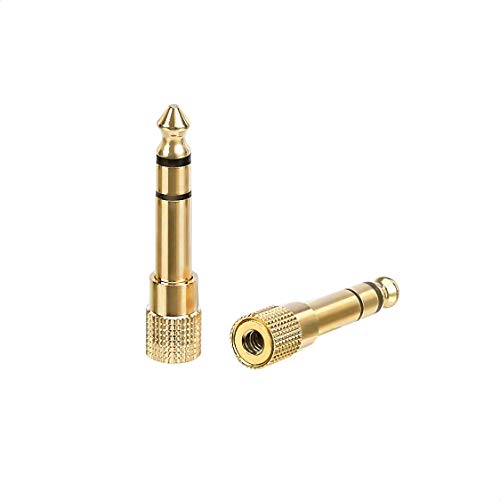 There are even various Bluetooth adapters that you can use to connect your Bluetooth headphones to the amplifier in question, and even some examples of amplifiers that offer Bluetooth capabilities out of the box, though this is of course not all guitar amps.

Similarly, you can just as easily plug your headphones into a multi-effect pedal to the same effect. There is a hyper abundance of these kinds of pedals around at the moment, those that boast pristine amp modeling, almost perfectly suited to the task of enabling the user to practice electric guitar quietly.

In the last few decades, music technology has blossomed at an intense rate, with amp simulation in particular taken to dizzying new heights, allowing for the near-perfect replication of a plethora of vintage amplifiers, or even some from nearer our own time. The sound quality is often uncanny, with many professional guitarists not otherwise able to tell the difference.

In much the same way as those modern amplifiers outlined above can allow guitar playing in private, a multi-effect pedal like so can allow the righteous to practice guitar, and in this instance without any need for an external amplifier system.

And just like those modern amplifiers, the beauty is in the simplicity, with some even allowing the use of Bluetooth headphones while you practice guitar, ensuring a polite equilibrium of guitar headphone amplifier that is going to cause an as little commotion as possible outwardly. All you will need other than the effects unit will be a guitar cable and perhaps some headphone jacks, and away you go! 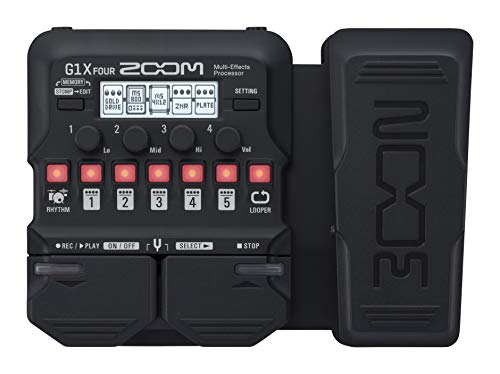 This concept is very similar to the use of the multi-effects pedal units previously mentioned, though having negated any multi-effect laden conduit altogether. Through the use of an audio interface, one can very easily plug guitar into computer and use various digital amplifier models online and in Digital Audio Workstations (or DAWs) to listen to and practice guitar with headphone amps.

These multi-effect pedals are more often than not laden with a whole host of extra effects that can get in the way of playing guitar, especially if that is precisely what you are looking to do in the first place, in which case it would be silly to invest in such a piece of equipment.

A mini amplifier also might do the job of answering can you plug headphones into a guitar, though in using an audio interface to translate the various signals from the guitar to the computer to the headphones, the signal is left mostly untouched, allowing you to manipulate it and edit it or simply to leave it be to your heart’s content once it is fed into your ears.

In this way, you can even connect Bluetooth headphones to your computer and use those to sample your guitar tones, having been fed through amp modeling software of course. This is of course a far from a sanctimonious way to interpret your guitar signal, as various elements of the sonic frequency spectrum are lost when fed through the airwaves via Bluetooth, providing a less than extended frequency range.

If you are simply practicing guitar via the headphone adaptor, this should not prove to be too much of an issue, especially as this method will provide the excellent sound isolation desired to practice in peace and to alleviate your neighbors from the pain of so-called noise pollution.

So, there you have it! Hopefully, you are now feeling more clued up on how to plug headphones into a guitar, whether it be electric or acoustic, and are feeling better able to at least discourse with the right people about investing in a piece of technology that can act as an intermediary between the raw signals of the guitar and the headphones or earbuds you choose to use to pick up these sounds.

Godspeed you! on your eventual audiophilic journeys.

Can you plug headphones directly to guitar?

Sadly not, even if you purchase an adapter that turns your 3.5mm headphone cable into a 1/4 inch headphone cable that will fit into the guitar’s output jack, it simply will not work. An intermediary is needed to translate the raw vibrational data that the guitar’s pickups transmit and turn it into a sound that can be processed by headphones and speakers and the like. A typical intermediary might be an amp simulator on a computer, a multi-effects pedal unit, or even a mini amp that can be attached to the guitar, acting in its own way like a headphone adapter.

Can you plug headphones into a guitar pedal?

Indeed you can, and in fact, this is one of the main ways that you can plug headphones into a guitar. The best way to do so would be through a multi-effects unit, which in itself boasts a series of amp simulators; these units (if constructed contemporaneously) tend to have a headphone out jack in the back, and (depending on how modern the model is) this headphone jack might even accommodate the more common 3.5mm instead of a 1/4 inch cable. I have, however, also done so through the regular output of a guitar pedal, though I am not entirely sure this is possible with all models, nor would I say that this is a particularly advisable course of action.

Can you plug headphones into an acoustic guitar?

This very much depends on the model of the guitar. If the acoustic guitar in question comes with electro-acoustic capabilities then there is at least a possibility of plugging headphones in; if not, then there is no chance whatsoever, one of the central differences in answering what is the difference between acoustic guitar and electric acoustic guitar. Some electro-acoustic guitars might come with a headphone out jack installed, though just as with an electric guitar you cannot directly plug a pair of headphones or earbuds – no matter the size of the input cable – into a guitar, no matter how hard you might try. In all eventualities, you will need an intermediary of some sort, whether that be a multi-effects unit or an interface that connects the guitar to a computer through which it can be heard with headphones.

How can I practice guitar through headphones?

Indeed you can, though you will need an intermediary of some sort. You can use a multi-effects unit, feeding the guitar’s signal into it and then sending it forth to the headphones via an output jack (with the added advantage of being able to process the guitar’s tone with one of the in-built amp simulators); you can just as easily use an audio interface that transmits the guitar’s sound signals to your computer through which you can listen to it with the headphones; alternatively, you can use a mini amp which attaches to the guitar via the output jack and acts as a direct adapter between guitar and headphones.