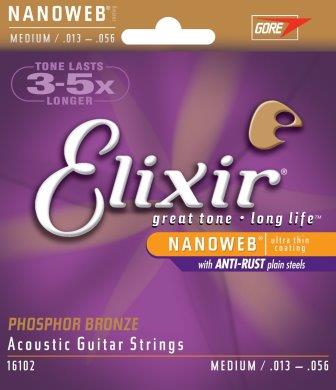 Hello and welcome to my Elixir Nanoweb Phosphor Bronze review.

I’ve had these strings on my guitar for a good while now and this review will go into detail about what I think of the strings.

Contents hide
1 Overview
2 Longevity
2.1 How much longevity?
2.2 Appearance of the Strings
3 Tone
3.1 The Difference these Strings can Make
3.2 Price and User Reviews

If you like the tone of Phosphor Bronze strings (and personally I do) then you should definitely give the Elixir Nanowebs a try.

If they don’t become your favourite strings (which they very well might do) they’ll certainly be a great set of strings to have on your guitar for their lifetime.

And that lifetime is going to be a long time.

Not only is the tone great but you get that great tone from the get-go. Usually new strings (to my ear anyway) are overly bright when they first go on a guitar – and it takes a bit of playing to get them to settle down and sound nice.

With Elixir’s Nanoweb’s there’s something about the coating which is supposed to give them an already played in sound right from the beginning. This is 90% true. I found they were still a little bit over bright from the start. But they very quickly settled down into that sweet spot.

I’ve heard of some guitarists saying they’ve left these strings on for 18 months and they still sound o.k. Now this of course will depend on how much you play but that’s impressive.

I haven’t had mine on for that long so I can’t tell if I’ll need to change them before then – but I suspect that I will.

But what I can say is that I’ve had these strings on for 8 months now (average playing time of 45mins to an hour per day, 4-5 days per week) and I won’t claim that they sound like they did in the early days – but they certainly don’t need replacing yet.

Appearance of the Strings

One of the amazing things – and the reason why they’ve kept their tone for so long – is that they still look bright and clean.

Usually after not that long (3-4 weeks at best) my strings start to look dirty or have a slight rust tinge on them.

And this is the reason they are able to keep their tone so well. The reason that strings usually loose there tone quickly is because they absorb dirt and sweat from your fingers. The Nanoweb coating that Elixir puts on their strings repels this.

This was always the claim on these strings but I wasn’t sure how effectively they would be able to do this – but the evidence is there – after 8 months and counting the strings are still perfectly clean.

O.k. that’s all very well – but what good is the tone lasting all that time if it’s not a good tone right?

To me I love the tone of these strings. Some people don’t like the tone of coated strings and so prefer to go uncoated, even if it means a shorter lifespan.

And I can see where they are coming from. Coated strings can sound very different to uncoated strings and can often have less clarity.

But Elixir seem to have the coating formula right with these strings. The tone is great and the coating they use is apparently very thin.

The Difference these Strings can Make

I put these strings on a cheap guitar that I bought about 9 months ago. Now, the strings that were on the guitar originally were not the greatest by a long shot – but when I put on the Phosphor Bronze Nanoweb’s the difference was quite remarkable.

And the strings are literally the only things I changed on the guitar.

Whilst these strings have a MSRP (Manufacturer’s Suggested Retail Price) of $34 (USD), I managed to pick them up for around $14.

To be honest the $34 MSRP wouldn’t even be that bad a price to pay for strings that last this long – but definitely don’t pay that because you can get them cheaper. 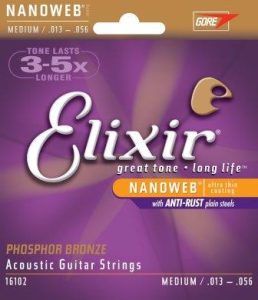 These strings are definitely worth trying if you want strings with a great tone, and tone that will last and last. Check out the links above for heaps of user reviews from others that have used the strings. Unsurprisingly those reviews are almost exclusively positive.

Thanks for Reading and I hope you found this review helpful. Any questions or comments are very welcome in the comments section below.