Hello and welcome to my Fender Tim Armstrong Hellcat Review.

This is the first in a series of reviews of acoustic guitars costing less than 500 dollars.

How the Hellcat will be Rated

First off I will discuss the sound of the guitar, both from my own experience and what you can expect from the materials used in making the guitar – followed by some videos of the guitar being played so that you can get some idea of the sound for yourself.

Then I will discuss the playability ? again both from my own experience and based on the materials used on the guitar.

Finally I will discuss the overall value for money, the type of guitarist the guitar would be best suited to and some links to some user reviews so that you can get some other opinions of the guitar?s sound and playability.

One thing that I did notice when I picked up this guitar was that it was a small hellcat. The guitar felt slightly smaller than what I was used to and this is because it is a concert shape.

If you are used to a dreadnought then this guitar will feel small ? it will even feel small compared to a grand auditorium shape (the next most common body type next to the dreadnought) ? but this definitely isn?t necessarily a bad thing and I don?t think it hindered the playing ability or the sound of the guitar.

Sure,?it doesn?t produce the same kind of volume and boom as a dreadnought, so if you are really looking for that then you are better off going for a dreadnought, but it certainly wasn’t timid either.

O.k. so here?s a brief list of the materials used on the hellcat and what you can expect from the sound.

Hear the Sound for Yourself

You?ll never get the full impression of the sound from watching videos but hopefully this video should give you some idea of the sound.

When I first started playing this I was pleasantly surprised with how it played. It felt like it played quite fast and didn?t require too much effort.

But after playing for a few minutes my hand started to feel fatigued which is when I noticed the action was quite high.

A high action isn?t the end of the world because it?s something that can be adjusted ? which is, along with replacing the nut and saddle, the first thing I?d have done to this guitar. If you aren?t sure how to lower the action then see if you know someone who does or take it to a guitar shop to be done.

You?ll definitely be thankful if you do unless you like the action high, in which case it?s probably ok where it is. Personally I prefer my action low.

The fretboard felt nice. It?s made from Rosewood so that?s part the reason. This is the most common material for acoustic guitar fretboards but it?s?the most common for a reason – because it does a great job.

Bending, sliding etc was easy enough to do on this guitar. It would be even easier with a lower action.

As I mentioned earlier, the Hellcat is a concert shaped guitar. This basically means that the lower bout on the guitar is around 13 ? to 14 inches compared with a lower bout width of 15 inches on a grand auditorium and 16 inches on a dreadnought.

This is great for smaller players or anyone who likes smaller guitars in general. Playability-wise I quite enjoyed playing it.

The nut width is 1.69? (43mm). This is pretty standard on acoustics these days but it?s a nice slim nut great for anyone with smaller hands and great for strumming and flat-picking. A slightly wider nut width can be better for finger picking but I didn?t have any trouble finger picking on this guitar.

Who this Guitar is Best Suited to 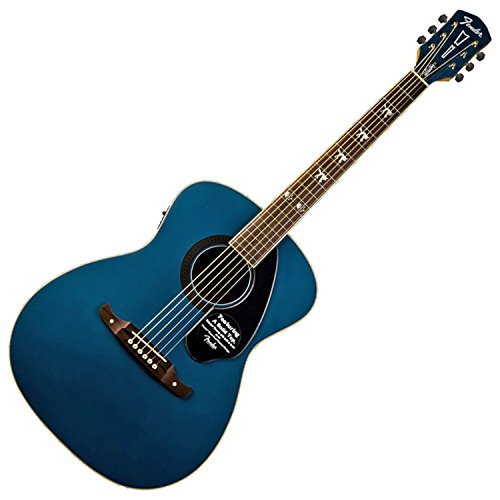 Now?a quick word on who this guitar would be best suited to.

If you like a nice compact, balanced tone that is warm?-?so the highs aren?t too jangly and the bass not that resonant?- then you’ll probably love the sound of this guitar.?You can really strum this guitar quite hard and the sound won?t sound piercing or muddled?(if that makes sense!).

If you are a specialist finger picker then it?s possibly not the best choice but that being said I certainly had no trouble finger picking on it. So if you like to do a bit of finger picking as well as strumming and flat-picking then this guitar would be great as an all-rounder.

This guitar would also be great for a beginner or for a kid learning. Its smaller size makes it easy to handle and easy to play in that sense. Get the action lowered and it?s almost the ideal starter guitar ? and the price is good for beginners too.

All in all a great little guitar at a great price.

There was nothing particularly special about this guitar, apart from its looks (I think it looks pretty awesome personally – mainly due to that mahogany top) but overall it is a great compact sounding guitar and quite nice to play. For the price you are getting a quality instrument here.

Like I said earlier I would definitely lower the action and probably replace the nut and saddle. After doing those things I would be extremely happy with this guitar. Without actually doing them it?s hard to say how much impact they would make but my guess is that this would be?more like a $1,000 guitar with those simple-ish and cheap changes.

And you know, I?m fussy?-?so you may not even feel those changes are necessary. So overall definitely a yes in terms of value for money!

If you are keen to learn more about the Hellcat, or if you’re ready to buy, or if you want to research current prices and availability, check out the links below.

If you want to check out some other under 500?options or want to see how the Hellcat compares to other guitars in this price range, check out my top 5 guitars under 500?at the link below.
>>Six String Acoustic’s Top 5 Guitars Under 500