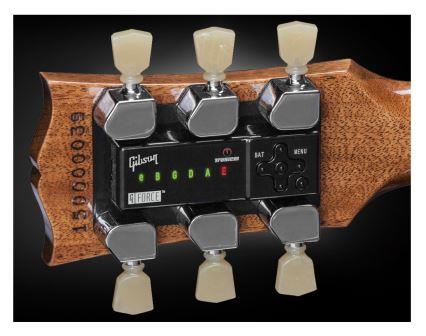 If you haven?t heard of the G Force Tuning System yet, then you might be surprised to know that you can get a guitar that can automatically tune itself!

The Gibson automatic guitar tuning system isn?t the only one available but it?s one of the most well-known.

What is the G Force Automatic Tuning System

Essentially it is what it sounds like it is. It is an electronic system that automatically tunes your guitar for you.

It?s not like an electronic tuner that tells you how far off you are from being in tune.

It figures out how far off you are and then tightens or loosens the strings automatically until they are in tune.

All you have to do is turn it on, strum the strings?and it does it for you. You can also choose to do each string one at a time. But at no point do you ever touch the tuning pegs. They are tightened and loosened automatically.

Importantly you do still have the option to tune manually. But make sure the G Force unit is turned off before you do.

Basically there are small, lightweight motors inside each of the machine head. These motors can tighten or loosen the strings. The motors are attached to a controller module.

Tuning All the Strings at Once (speed tune)

To tune all strings at once all you have to do is to push the on button, strum all of the strings open and then when the G Force is done tuning (when all the LEDs are green) it turns off automatically.

If any of the LEDs remain red then simply pluck that individual string until it is green.

If you want to tune each string individually (for more precision) then you hold the on button until the LED for the E string turns red. Pluck the E string – once that turns green, the next string will come up. Then pluck that string.

Keep going until each string has turned green (again it will turn off automatically once all the LEDs are green (i.e. once all of the strings are in tune.

The G Force tuning system is set to tune for standard tuning as default.

However, there are also several alternate tunings that you can select – plus you can program in your own custom tunings too.

There are also low tuning pre-sets. These are the white and the yellow pre-set banks. Then there is a Magenta pre-set banks where you can do custom low tunings. The Magenta defaults to C tuning (which is C, F, A#, D#, G, C)

The pre-sets are outlined in the table below.

Once you select an alternate tuning and have the G?Force tune to that tuning it becomes the default. So the next time you use the G Force to tune it will tune to that.

The re-stringing process is slightly different – and you can use the G Force to wind your strings too.

However, you cannot use a string winder when you have the G Force tuning system.

You can also set the G Force to tune to another instrument. This requires some tuning by ear – but still makes the process faster.

For example – you are playing with a pianist and the piano isn?t tuned perfectly. You just tune one of your strings to the piano and then the G Force can tune the rest based on that one string.

Can I add this to an Existing Guitar?

The tech that goes into this has to be pretty precise. So currently you can’t just buy a g force unit and install it on a guitar. To take advantage of the system you need to buy a Gibson guitar that already has the system.

Does it Work Properly?

A lot of people are skeptical of this type of thing actually doing the job properly. But this?was also the case when electronic tuners first made it to the market.

Yes, a lot of those weren?t great initially but now a lot of guitarists stake their reputation on them.

Now, even if you haven?t heard of guitar automatic tuning systems before, don?t make the mistake of thinking they are new to the market. They have been around since 2008. So they?ve had 8 years and counting to actually make these things good.

That said, there are still people who think that jury is out on this. Whilst, there are others who wouldn?t buy a guitar without it – because?they spend so much more time playing their guitar and a lot less time tuning it.

What?s been your experience? If you?ve tried, or own a guitar with the G Force tuning system, how well do you think it works?

Is it a Good Thing or a Gimmick?

Is this kind of technology actually helpful? Or is just a selling point?

Others say it?s simply a convenient and fast way to tune – and that it doesn?t replace tuning by ear but simply allows for quick tuning saving time – and for a quick convenient way to tune on stage or if you playing with an orchestra. You can quickly and silently get in tune.

What do I think?

I think that it would be more than handy to have for a stage situation. And for tuning to other instruments.

I also think that some guitarists could use it exclusively and never learn to tune by ear – which wouldn?t be a great thing – particularly if your G Force ran out of batteries! And also because it?s a skill worth knowing.

However, like electronic tuners didn?t, the G Force tuning system isn?t going to breed a generation of guitarists that can?t tune by ear.

There?s a bit of a debate in the link below (you can also learn more about how the G Force works there too). Check out the comments at the end of the article – there are two comments by Joe Quimby and Dlydianb7 near the top – then scroll further down and you?ll see the start of their debate – a total of 6 comments back and forth (in my opinion Dlydianb7 was the clear winner).

More importantly – what do you think?

Is this a good piece of technology?

Is this something that will enhance the guitar experience or dumb it down?

Is this something that you?d like to have on your next guitar?

Just leave a comment in the comments section below. I?d love to hear other people?s opinions on this.