You are here: Home » How Do Acoustic Guitars Work? 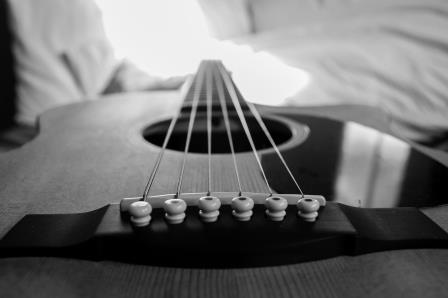 Have you ever wondered about how acoustic guitars work?

I always did. Not every wants to know what makes an acoustic guitar tick ? some just want a guitar that sounds great and is nice to play ? for those that are curious though, read on.

I?m not going to delve into anything really complicated here in terms of the physics of sound (partly because I don?t completely understand it all myself and partly because I don?t want to bore you!) but just give the basic of how an acoustic guitar creates sound and the part that all of the parts play in creating that sound.

How the Sound is Created

The sound of an acoustic guitar is essentially created through vibrations.

6 strings (on a 6 string acoustic) are wound tightly and when plucked they vibrate. Each string vibrates at a different rate, and those rates of vibration determine the pitch of those strings.

How the Components Work Together to Create Sound

The strings are held onto the guitar via the bridge at one end and the headstock and the nut at the other end.

The Bridge and Saddle 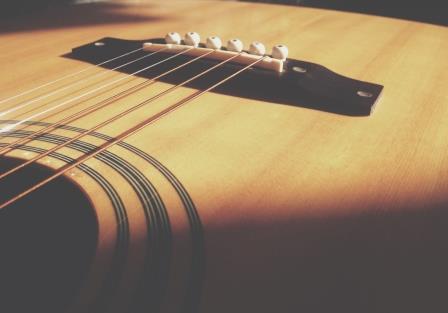 The bridge is made up of a wooden piece that connects directly with the top (soundboard of the guitar) and houses the saddle.

The bridge and the saddle play an important role in both the tone and volume of the guitar and also in the playability.

The saddle (usually made from bone, plastic or an artificial material made to emulate bone) plays a few important roles ? the first is for tone. The material of the saddle will help determine the tone of the instrument, and will be particularly influential on the sustain of a note.

But it also plays an important role in intonation ? ensuring that the strings are tuned to where they should be.

Finally, the saddle plays a role in playability of a guitar. The saddle helps to determine (along with the nut) how high off the fingerboard (fretboard) that the strings will sit.

>>More about the Bridge and the Saddle

The Nut & the Headstock 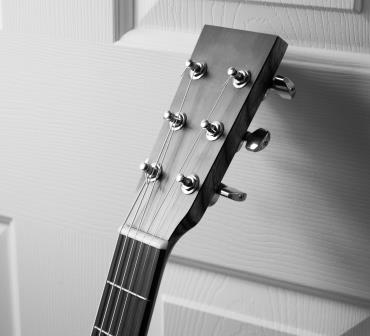 At the other end of the guitar the strings are attached to the headstock. Before the headstock we have the nut.

The nut plays a role in the tone and sustain of the instrument, like the saddle ? but the most important role of the nut is for string spacing and string height.

The nut has little grooves in it which the strings sit in. This is to make sure that the strings are properly spaced so that they are optimal for playing.

The height of the nut and the depth of the grooves in the nut will also help to determine how high the strings will be off the fingerboard. 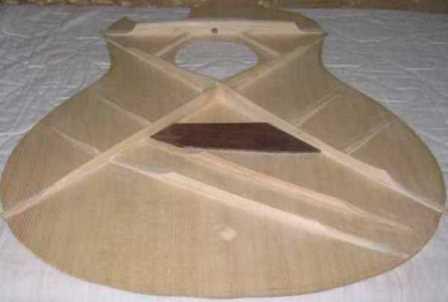 The top is one of the most important factors that will determine how your guitar sounds.

The wood for the top needs to be flexible and thin enough to vibrate properly but also has to be strong enough to handle the tension of the strings being placed on it.

This is where bracing also comes into it ? bracing is placed on the underside of the top ? you don?t see it on the guitar but it plays a very important role in helping the top to be strong and in allowing it to vibrate in a certain way.

>>More about Different Tonewoods for the Top

The importance of the neck of the guitar is to be strong enough to be able to hold the tension of the strings without bending, warping or breaking.

The neck also houses the fretboard.

>>More about the Neck of the Guitar

The fretboard is a piece of wood that is placed on top of the neck. This plays an important role in the functionality of the guitar.

The fretboard houses the frets – these frets separated the strings into sections so that a guitarist can determine where to place his/her fingers to produce the note that he/she wants. Essentially pressing a string onto a fretboard shortens the length of that string and therefore changes the fretboard.

The higher up (closer to the soundhole) the fretboard that a string is pressed, the shorter that string becomes when you play it – and the shorter the string, the higher the note.

For acoustic guitars the two most common woods for fretboards are Rosewood and Ebony.

Different shapes put different emphasis on the high-end, low-end and mid-range in the tonal spectrum.

The size of the body also helps to determine how loud the guitar will be and also how hard the strings need to be plucked or strummed to produce a nice sound. Large bodied guitars tend to be louder but also require a bit more oomph to get the sound you would like out of them.

These are just some basics about how a guitar works and what role each part of the guitar plays.

What those parts are made from and how they are made can influence both the tone and the playability of the instrument and all those parts play a crucial role in making the guitar sound and function the way that it does.

I hope this post has increased your knowledge about the workings of an acoustic guitar. Feel free to leave a question – or a comment, if you have anything to add.

BRACING: By Zanthorp (Own work) [CC BY-SA 3.0 or GFDL], via Wikimedia Commons