You are here: Home » How Many Strings does a Guitar Have?

This is a simple question, surely, a guitar has six strings, right? Well, like so many things about the guitar, it is all a little more complex than that. Throughout the history of the instrument, forward-looking players and luthiers have sought to expand the range and capability of the guitar by adding extra strings and by creating new or just plain weird instruments. In this article we are going to look at some of the alternative possibilities to the traditional six-stringed guitar, how these are used as well as some of the pros and cons associated with what we shall call ‘alternative-stringed’ guitars. 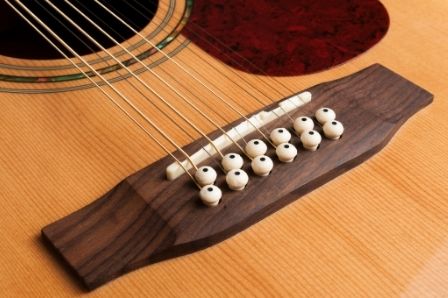 Probably the most recognised alternative-stringed guitar is the 12-string variation of the instrument. Popular with folk, blues and rock players of the 1960s and 70s the 12-string guitar has a second course doubling each of the traditional six strings of the guitar. These additional courses are normally tuned to the same notes as the corresponding main string, however, the lowest four strings are generally an octave higher in most cases with the top two strings in unison.

The acoustic 12-string guitar has a big booming tone with deep low end and chiming highs. It sounds very full and slightly chorused as a result of the doubled notes being struck at fractionally different times and inevitably being fractionally out of tune with one another no matter how carefully the instrument has been tuned and intonated. This makes it the perfect instrument for accompanying big-voiced singers or solo artists wanting to fill lots of space with a single guitar. However, it can sometimes sound a little too expansive when used in a band setting or dense in a recorded mix, and may need sparing arrangements and/or studio engineering to make it fit within a track.

A number of manufacturers also offer electric 12-string guitars. These share many of the sonic and playability characteristics of their acoustic cousins. However, the effect of amplifying the 12-string creates quite a unique voice in its own right. The Rickenbacker electric 12-string guitar was used extensively by the Beatles and George Harrison in particular on the album A Hard Day’s Night. Perhaps its most famous user was Roger McGuinn of the Byrds. McGuinn’s solo in Eight Miles High from the album Fifth Dimension uses Coltrane-inspired runs performed with his electric 12-string guitar to create a psychedelic and mystical mood quite unique in the history of recorded music at the time. As well as the Rickenbacker company, electric 12-string guitars have been made at various times by Fender and Gibson. Gibson in particular used the electric 12-string to pair with a normal six-string guitar on their double neck EDS-1275 model made famous by Jimmy Page of Led Zeppelin and used to great effect during live performance on the classic Stairway to Heaven. The double neck concept has been quite successful for 12-string electric guitars as it allows the player to access the 12-string sound when needed whilst being immediately able to switch to a conventional six-string in the same song. As well as Jimmy Page, famous double six/twelve players include John Mcloughlin, Don Felder and Slash. 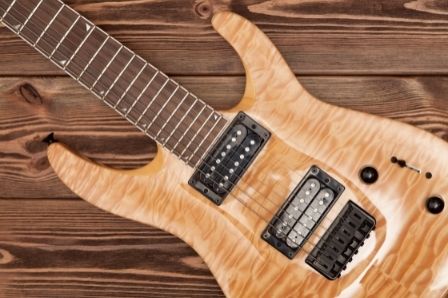 Conceptually different to 12-string guitars, seven- and eight-string guitars are at the most basic level normal six-string instruments with one or two extra strings added. However, the implications of this can be quite considerable and in some ways they become alternative instruments in their own right with their own approaches, advantages and limitations.

There is a long history of players seeking to expand the range of their instruments by adding additional strings to their traditional 6-string guitar – as far back as the early years of the guitar’s popularity in the early 20th century. Perhaps best associated with this development was George Van Eps, an influential early jazz player who is best known for his intricate pianistic style using block chords and voice leading on his modified seven-string Epiphone guitar. Subsequently players like Bucky Pizzarelli continued this tradition, although with the exception of a short-lived Van Eps signature model, seven-string guitars were not commonly available from any of the major manufacturers, making them rather inaccessible except to more adventurous jazz instrumentalists. The main advantage to these advanced jazz players using the seven-string guitar has been that it brings a greater range of notes within reach of the fretting hand in any single position. This allows a player to voice more complex chords with melody notes and even deep bass lines simultaneously, without impossible stretches or tapping on the guitar neck. Arguably the player who most completely mastered this style of playing was the legendary Lenny Breau who played a seven-string guitar with an added high A-string. Lenny could effortlessly play complex chords whilst soloing on top of these and playing a bassline simultaneously.

More recently the electric seven- and eight-string guitars have been adopted by the younger rock and metal guitarists who embrace the potential for expanding their range. By adding one or even two lower strings these instruments facilitate the playing of heavy riffs low down in the instrument’s range whilst not losing the ability to play lead lines high up the neck in the upper range. Other progressive players like Sarah Longfield and Yvette Young have used the extra strings with advanced tapping techniques to create dense pianistic lines melding modern acoustic technique with more electric ideas. Emerging as the lead manufacturer of seven- and eight-string modern electric guitars is Strandberg Guitars, who produce a range of modern instruments designed for ergonomic efficiency as well as superior sound and playability.

Perhaps the most important development in the wider adoption of seven- and eight-string guitars in recent years has been the use of fanned frets. Developed by luthier Ralph Novax in the late 1980s, fanned frets enable each string to have its own scale length with the lower strings being longer than the higher strings. This means that higher pitched strings can be added to the conventional six-string guitar configuration whilst not breaking under tension and lower strings can be added without sounding weak or buzzy. Prior to this, players using seven- or eight-string guitars would constantly break added high strings and would have weak tone on additional strings tuned to a lower register than normal for the instrument.

This development not only revolutionised the world of seven- and eight-string guitars but has in recent years led to a new style of playing emerging. Hybrid guitar is an approach where the guitarist takes on the role of more than one musician (usually the bass player) as well holding down the rhythm (and even lead) guitar duties on one instrument. Perhaps the most famous player and arguably the originator of this style is Charlie Hunter. Charlie developed an almost inconceivable facility for playing bass, rhythm and lead parts simultaneously, with perhaps the deepest groove on the planet, in the mid 1990s. Charlie ran the lowest three strings of his Novax eight-string into an Eden bass amplifier and the upper strings into a conventional guitar amplifier (usually a Fender Twin Reverb). This further emphasised the distinctive sounds of bass and guitar in his playing and allowed him to take the role of both instruments in his bands. Recently Charlie has played instruments of seven and six strings in a similar style, and indeed now he is one of the driving forces behind the Hybrid Guitar Company, a small manufacturer dedicated to the production of six-, seven- and eight-stringed guitars for playing in the ‘hybrid’ style.

For players considering seven- or eight-string guitars there are a few things to bear in mind regardless of what style of music they plan to perform. Firstly, the neck with will be considerably wider than on a traditional six-string guitar and if you have an instrument with fanned frets then this may take a little getting used to. Your fingers will need to adapt to the different fret spacing across the strings, not just along the length of the fretboard. Also, to take advantage of the extra strings you will need to work out the scales and fingerings for your particular configuration. There is relatively little educational material available as of yet and consequently to truly get the most out of these super-stringed instruments, a player will need to be sufficiently advanced to develop their own materials and learning progression. 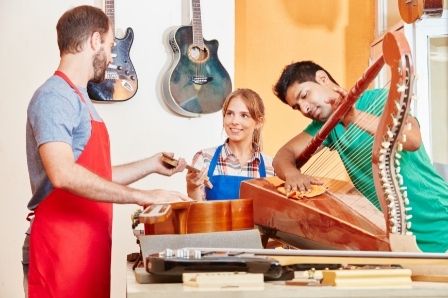 Another of the alternative-stringed developments in guitar with a long history is that of the harp guitar. Harp guitars emerged long before the modern guitar became established in the 20th century and indeed have their ancestry in much earlier instruments. A harp guitar, in addition to its normal six (or sometimes seven) strings has a number of bass or treble strings added. These strings are generally not fretted and so are tuned to specific pitches to extend the range of the guitar, much like a harpist might play. Although there is a long history of harp guitars with companies like Gibson manufacturing these in reasonable numbers in the early part of the 20th century they, have gained very limited acceptance by players of the guitar. Perhaps the two most notable harp guitarists are Michael Hedges and Phil Degruy. Hedges could be considered the most influential acoustic guitar player of the 20th century and regularly used the harp guitar to expand the low range of his instruments allowing for deeper bass notes further extending his already complex pallets of alternative tunings. Degruy on the other hand plays a Novax-built electric harp guitar with ten additional high strings, amusingly named ‘the Guitarp’, to create advanced jazz arrangements following the tradition of Lenny Breau, Van Eps and the amazing Ted Green.

Harp guitars are relatively hard to obtain and are invariably expensive instruments that have been custom built. As with seven- and eight-stringed guitars, there is comparatively little educational information for players of these instruments so they are very much not for the faint-hearted. 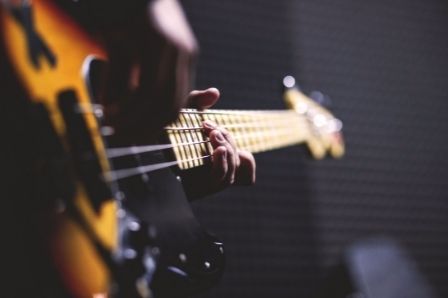 Whilst the above instruments perhaps represents the most obvious alternative-stringed guitars there are a number of other related instruments that have different numbers of strings. For example lap and pedal steel guitars may have between six and twelve strings and often multiple necks expanding this further.

The Coral Electric Sitar has a number of sympathetic drone strings and was a popular way of approximating the traditional sitar in the psychedelic era. The most famous example of the electric sitar may well be the solo from Do It Again by Denny Dias of Steely Dan.

Other instruments have been developed for touch style playing where the player taps two-handed on the instrument. Perhaps most famous of these is the Chapman stick which usually has either ten or twelve strings and can be used to play multiple parts simultaneously.

At this point, the electric bass guitar should also be mentioned. Whilst strictly not a guitar, the traditionally four-stringed electric bass is commonly played in five- and six-string variants and some players have performed on instruments with up to twelve strings, taking the bass well into the range of the guitar.

Finally: an honorary mention must go to legendary Rolling Stones guitarist Keith Richards! Keith regularly plays a normal six-string guitar but with the lowest string removed. Tuned to an open G chord, this facilitates many of Richards’ most famous rhythm parts and contributes to his unmistakable tone.