You are here: Home » How to Play Guitar Standing Up with an Acoustic Guitar

Playing an acoustic guitar standing up isn?t too much different from playing sitting down but there are a few things to keep in mind.

This post will give you some tips on how to play guitar standing up with an acoustic guitar.

I know – this one is obvious. But some people don?t get around to it and then sometimes try to play standing up without one. It?s just not worth trying to play like that. Get a strap.

Most acoustic guitars will come with strap pegs that you can attach your strap to but in the unlikely event that you have a guitar without strap pegs you can have them installed.

If you really don?t want to buy a strap, you could try making your own. This is at your own risk but it can be done. I used to have a strap made from a belt and an old tie.

Make sure to get an adjustable strap (if you?re making your own make sure you make it at the right height for you – see below for the right height). The position that your guitar is in makes a big difference to how easy or hard it is to play standing up, so you want to be able to adjust the strap to suit your height and your preferences.

Tip #2: Height of the Guitar

If you?re playing electric guitar and you?re playing certain genres (particularly metal – to use a broad genre) then it might be necessary to have your guitar at your ankles (exaggeration) to project a certain image. And it?s certainly impressive to see people play at that (lack of) height.

However, with an acoustic guitar, you aren?t likely to be playing too much metal (if you are and you?re playing around your ankles please send me the video I?d like to see it!) and it?s going to look pretty weird if you do.

And what is that best height?

It?s the height that you would play sitting down.

This is the height you are used to and most comfortable with – so why not play at that height.

If you do a lot of hard strumming and not a lot of fingerstyle, then maybe you can afford to have the guitar a little bit lower but generally speaking set your guitar up to where it feels most comfortable – which is usually where you play it sitting down.

There are some that find playing standing up more comfortable – but most will prefer to play sitting if they are just playing casually at home, when recording or at a friends place, or a party etc.

Practice playing standing up well in advance to having to play standing up?with others or in a live setting.

Playing standing up will feel different so you?ll want to get used to it well in advance. Also it will give you a chance to experiment with what height and position you feel most comfortable with. 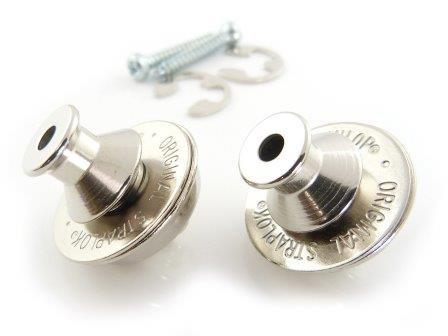 Guitars sometimes slip out of their straps. It?s not that common but it can happen.

And obviously this is not something that you want to happen!

At best it interrupts your playing during a gig or practice – at worst you could seriously damage your guitar.

If you are worried about this happening you can get strap locks that are like a fail-safe to prevent this from happening. You may be particularly interested in this if you have an expensive guitar to protect.

Tip #5: Wrap your Cable Through Your Strap

If not, then you can skip this tip.

Even though it?s more common with electric guitars (where the input jack is often pointing towards the ground), you can stand on your cable when playing standing up – particularly if you like to move around a bit when you?re playing.

If you stand on your cable it can pull the cable out and interrupt your playing – or worse it could damage the input jack on your guitar.

To help prevent this and protect against it, loop your cable through your guitar strap and then back around and plug it in.

Now if you stand on the cable it will just pull against the strap and won?t detach from your guitar or damage the input jack.

It?s still not nice on the cable, so try not to stand on it, but at least it shouldn?t interrupt your performance and it protects the input jack on your guitar.

Tip #6: Play How you Would Sitting Down

Apart from just the height you set your guitar at (see tip #2) also think about other things that will make it more like when you are playing sitting down.

Learn about the proper way to hold your acoustic guitar when sitting down at the link below.

>How to Hold An Acoustic Guitar Properly

The best thing you can do in learning to play guitar with a strap is to know yourself and to respect the feeling that is inherent to you. If something does not feel comfortable, you do not have to bear it; instead, you can adjust and find your own equilibrium.

In playing guitar standing up, many choose to mimic their favorite guitarists’ own standing position and the position of their guitar in relation to their bodies. 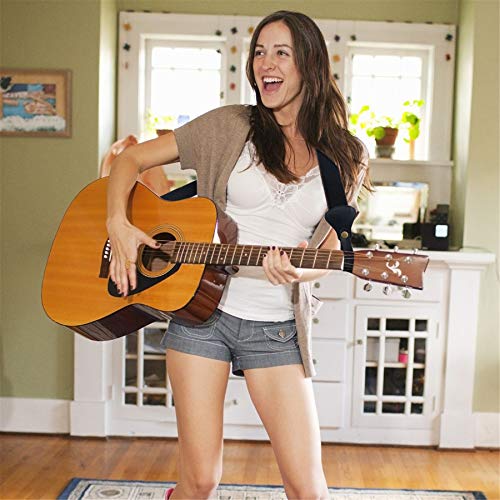 Krist Novoselic, for example, was known for wearing his bass basically at his feet, which went some way to exemplifying the kind of slacker attitude prevalent in Nirvana’s sonic and lyrical aesthetic philosophy.

On the other hand, we have a guitarist like Ezra Koenig of Vampire Weekend who wears his guitar almost about his neck like a neck tie. This might make for comfortable playing in his own hands, but might not for you. And that is okay, so long as you respect that and adjust accordingly.

It can be all too easy to mimic these icons of music – surely if they are doing it then it is the right thing to do, right? In reality, they are likely doing nothing more than respecting their own feelings and comfortability.

I hope this post has helped with your guitar playing when standing up.

If you have any other techniques that you use or if you have any different views on playing standing up, feel free to leave a comment in the comments section below. Any other comments or questions welcome too.

Related: How to Choose an Acoustic Guitar Strap

Is it harder to play guitar standing?

It is neither harder nor easier to play guitar standing up, it is simply different. That being said, there are certain things that make guitar standing up difficult, like the lack of a firm foundation from which to play, which in turn means the guitarist in question will struggle to play as accurately as they otherwise might. Likewise, there are aspects of playing guitar sat down that make it a little more difficult, such as the way that it can be more difficult to ‘get into’ the music and performance, considerably limited as one’s movement is when sat down as opposed to standing up.

Is it better to play guitar standing up?

Neither is inherently better than the other and both have their individual merits. For accuracy and communication through pure sound alone, playing guitar while sat down really cannot be beaten; the guitarist is given a firm foundation from which to play and is able to guide their attention solely to the music in question. For expression in other areas and for letting loose, then playing guitar standing up is really the way to go; it can be difficult to get into the performance and move and groove when sat down, gravely limited as one’s body movements are when seated.

Is it harder to play guitar standing up or sitting down?

This will depend on the kind of music you are going to play. If you are, for example, going to be playing music that is more technical and that will require a greater amount of finger work and concentration on the part of the guitarist, then it will be harder to do so while standing up as the guitar is likely to move this way and that. On the other hand, if the music is going to be more fun and expressive, it will be harder to let loose and get into the feeling of the music while sitting down with the limited field of movement that one experiences when seated.

How should I hold my guitar while standing?

The best thing you can do in learning to play guitar while standing is to know yourself and to respect the feeling that is inherent to you. If something does not feel comfortable, you do not have to bear it; instead, you can adjust and find your own equilibrium. In playing guitar standing up, many choose to mimic their favorite guitarists’ own standing position and the position of their guitar in relation to their bodies. This might make for comfortable playing in their own hands, but might not for you. And that is okay, so long as you respect that and adjust accordingly.