You are here: Home » Five Creative Ways To Use A Capo

Guitarists tend to love or hate capos. To some it is an essential accessory that they wouldn’t get through a gig without, to others it is a lazy excuse for not learning to play anything above the third fret. In this article we are going to explore a few ways that you might use a capo creatively in your music as well as why sometimes it may be just the right tool for simple quick key changes without having to play awkward, unfamiliar or uncomfortable chords.

Contents hide
1 1. To Transpose A Song Into A Different Key
2 2. To Change The Timbre Of The Instrument
3 3. As A Stylistic Device
4 4. The Partial Capo
5 5. The “False Capo”
6 Conclusion

1. To Transpose A Song Into A Different Key

Perhaps the most common use of a capo is to quickly transpose songs into a new key without having to relearn all of the fingering positions or re-arrange the piece. In these cases whilst the fingering positions in relation to the open strings remain the same with the capo now acting as a new zero-fret (taking on the function of the nut), the actual notes played are now different. This can be handy in situations where you need to play a song in a different key and it might be tricky to learn alternative arrangements quickly. For example, imagine you were playing a simple bluegrass progression using open D, C and G chords as an example 1A below. If suddenly you arrive at the gig and your new singer tells you she needs the song playing in Bb major rather than G major what are you to do? Certainly you could come up with alternate voicings for the chords but maybe that wouldn’t sound quite right for the character of the song. Alternatively, you might feasibly play the existing voicings as bar chords at the third fret but that might be a technical challenge and quite tiring, particularly if this was a faster tune or goes on for some minutes. Also, in this scenario played as bar chords the voicings might not sound quite right and may not ring out in the way they would using open strings. You wouldn’t want to make the singer look bad by singing in an uncomfortable key (would you now?), in which case perhaps the best answer would be to play with a capo at the third fret as in example 1B. This has the advantage of preserving the original fingerings and without significantly changing the sound of the song whilst allowing it to be played easily in the new key.

2. To Change The Timbre Of The Instrument 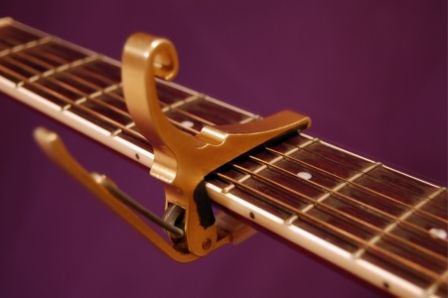 Another good use of the capo is to change the overall timbre of the instrument for special effect or to enhance a particular piece. Imagine you want a sound more like a high-pitched instruments such as a ukulele, mandolin, bouzouki or even a short scale guitar. Placing a capo, particularly on the higher frets, can significantly change the timbre of the instrument without having to resort to a second specially set up guitar. This occurs because you are in effect changing the scale length of your instruments so rather than the usual distance between the bridge and nut you have reduced this to the distance between the bridge and the capo. Shorter scale instruments tend to have some quite distinct sonic characteristics, for example, they may have less sustain and an overall brighter quality enabling them to cut through the band. This may also suggest different voicing and fingering positions because sometimes more narrowly spaced frets allowed things you would not otherwise think of able to do. As an experiment, try putting your capo on say the eighth or 10th fret of your instruments and playing some open chords. These will sound very different to playing them at the nut or capoed at the low frets. You might find the narrow spacing of conventional chords awkward to get your fingers into and actually find new voices with bigger stretches of five or more frets with the corresponding new open strings much easier.

3. As A Stylistic Device

Many players have integrated the capo as an integral part of their playing. This has been particularly the case in blues and flamenco styles where it has become central to many unique players.

Many early blues players including Robert Johnson, Blind Lemon Jefferson, Son House and others made use of the capo to increase the range of keys they performed in without having to re-tune for every song. This was particularly important as most of these players used chordal tunings like open G and open D for the majority of their compositions and often played with a slide utilising open strings to support melodies high up the neck. As a result swapping keys was not as easy as it would be for a traditional finger style player. By employing a capo, these players created the sounds central to so much of the music we hear all around us today.

It is not just acoustic blues players from the early years of the style who have used the capo extensively. More recently electric blues players have incorporated this within their own personal styles. For example the legendary Albert Collins played exclusively on a Fender Telecaster in open F minor tuning moving an old capo covered in electrical tape up and down the neck according to whatever key he was playing in. This was a significant factor in his unique sound particularly with his aggressive slides and bends in unison with heavily plucked open strings.

Another electric blues player who routinely used a capo was Lonnie Mack famous for his hit instrumentals ‘Wham’ and ‘Memphis’ (an instrumental arrangement of the Chuck Berry song). Mack used a capo on his 1958 Gibson Flying V guitar to great effect as this allowed him to play his lightning fast runs and pull offs with rapid picking and open strings in any number of keys. Combined with his use of the vibrato channel on his Magnatone amplifier Lonnie had a truly unique sound and style that was one of the major influences on the great Stevie Ray Vaughan. In fact another notable capo user is Stevie’s brother, Jimmy Vaughan, who commonly uses a capo in a similar way to Lonnie and many other blues greats to amazing effect.

And just in case you were thinking that using a capo is somehow cheating or for players who don’t have great technical abilities on their instruments I have three words for you – Paco De Lucia. In fact almost every flamenco player at some point makes use of the capo as part of this demanding style. The capo is deeply embedded in this Spanish tradition and many of the Soleas and Rumbas rely heavily on this to be performed correctly. Flamenco is a style involving complete mastery of the instrument played with incredible rhythmic precision at often blinding speed and the capo enables flamenco players to voice the traditional progressions of these pieces correctly whilst exploring new sounds and approaches to these often formal structures.

In recent years one particular creative development for the capo has been the partial capo. This is a version where the section holding down the strings is shortened such that it only holds down between two and five strings. This allows the player to set alternate tuning or chords on the open strings whilst allowing fretted notes to be played as if the instrument were in standard tuning. Multiple partial capos can be used simultaneously to create complex tunings or chord voicings on the open strings that would be impossible any other way. Almost all of the major capo manufacturers produce partial capos and these are a great tool for creative exploration of the instrument, particularly if you enjoy using chords with lots of open strings.

Okay so we are cheating a bit here but this is a really interesting way to utilise the capo concept to create what we will call here the false capo. This is a bit similar to the partial capo idea except that you don’t use a capo at all but use your left hand like a capo to hold a stationary chord or bar and then tap notes further up the neck to play interesting chords, melodies and voicings. If you are familiar and comfortable with playing bar chords, this technique shouldn’t be too challenging. If not, it’s a good idea to develop your left hand barring or ‘capo’ing ability, to the point that you can at least play all six strings cleanly with the bar finger applied, before you attempt these exercises, or similar ones which only require one left finger barred straight across.

An example of this in practice is shown in example two. In this example we are playing a simple major ii-V-I progression in G. With our left hand we hold the following voices for one bar each: A minor9, D9, G major. However rather than then strumming or playing these chords with our right hand we tap notes outlining related arpeggios further up the neck. So in this case above the A minor9 we outline an A minor7 at the 12th fret. Pulling off to the notes to the chord capoed by our left hand creates a full A minor9 arpeggio cascade. Over the D9 chord we outline a G sharp guitar chord, minor arpeggio, (without root) which gives us an added Sharp9 and 13. Finally over the G major chord we play a G major seven arpeggio and inverting the voicings for the final ascending line.

This sounds rather complex but once you get the hang of it the false capo is a great way to play interesting chord voicings, unique intervals and unusual sounds on the guitar. It sounds great on both acoustic and electric guitar. Played clean on an electric guitar with a touch of compression and tremolo this technique can sound remarkably similar to a Fender Rhodes electric piano and is great for accompanying work. 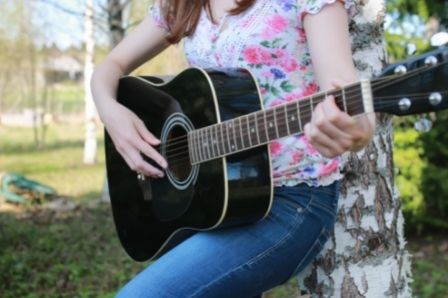 We hope this article is inspired you to dust off that old capo and try some new things. If you don’t already have a capo then we suggest every guitarist should have one of these in their accessory bag. Capos are relatively cheap and easily available from a range of manufacturers. In particular Kyser Capos, Shubb Capos. And more exotic brands like Spider Capos, with the innovative ability to adjust the fret capoed on each string, are easily available and will last a lifetime of creative playing.