You are here: Home » Learn The Notes On A Guitar Fretboard: Diagram plus Techniques 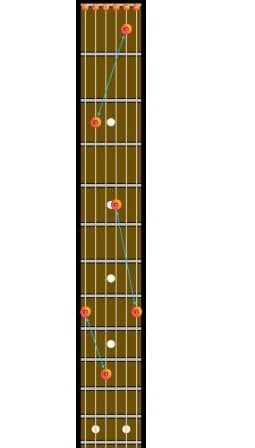 Why learn the notes on a guitar fretboard you might ask?

Well, for a number of reasons.

Sure you can get away with knowing a few songs and even become quite a good guitarists without ever knowing the notes beyond the open string notes. But your development will always be limited to a point.

And if you ever want to improvise it will be very difficult.

Why Learn the Fretboard?

Yes scales and chords are all in patterns, but you need to be able to?find the root note – and usually quickly.

Improvising: If you are improvising over other music and they tell you they are in the key of C and you know the scale pattern you should be playing but have no idea where to start that scale you?ll be lost. If you know the notes on the fretboard you?ll be able to find that root note quickly and easily.

Performing Leads: If you are performing leads, you will want to make full use of the whole fretboard.

This doesn?t mean that you will know the name of each note as you are playing it – you won?t be able to compute it that fast. But if you can find the root note for the scale in different parts of the fretboard it will enable you the potential to create a much more interesting and impressive lead.

Composition: Knowing the notes of the fretboard can also be a huge help for writing compositions/songs. Chord construction becomes much easier when you know the notes on the fretboard or can at least quickly figure out what they are.

These are just some of the reasons why you might want to learn the fretboard but there are other reasons too – and even though it sounds like a daunting task it will actually make playing the guitar more enjoyable in the long run.

O.k. so here are some basics you?ll need to know to learn the fretboard on your guitar.

But what about the flats?

The flats are Bb, Db, Eb, Gb, Ab – these are actually the same notes as the sharps but with different names. I won?t get into why here – that?s for another post!

Where the musical notes fit on the fretboard

So we have these musical notes but where do they go on the guitar.

As you probably know, in the standard tuning of a guitar the open strings are E, A, D, G, B, E. Play those strings on the 12th fret and you have the same notes – but an octave higher. On each string – from the open string to the 11th fret – you have all 12 musical notes.

So on the E string each fret represents a semi-tone so it?s really pretty easy when you think about it.

This means that in between the open string and the 12th fret there is only 1 of each note on each string. Doesn?t seem so daunting now!

So let?s use E as an example and locate every E between the open string and the 12th fret on each string. Remember there will be 1 of every note on each string.

That?s every E between the open string and 12th fret – easy right!

Now let?s take a look at A.

If you look closely there are some patterns emerging here.

Where the note is on the 6th string the same note is two frets up on the 4th string.

If the note is on the 4th or 3rd strings then the note same note two strings?down will be 3 frets up.

Practice playing around with this on your guitar and it will make sense.

If the note we are looking at is open on any of the strings it will be the 7th on the next string.

The exception to this rule is that the open 3rd string (G string) corresponds to the 8th fret on the 2nd string (B string).

Whatever the note is on the 6th string will be on the same fret on the 1st string. This is because, in standard tuning anyway, both strings are tuned to the same note.

Check out the video at this link to for more on learning the fretboard.

Check out the image to see how this works with the note C.

There are certainly other patterns but these are a good place to start. Play around with these on your guitar. Start with learning E, A, D, G, B, F and C – these will be easier to learn?than the sharps/flats.

I find it?s easier to learn patterns like this to start your journey into learning the fretboard rather than trying to memorize which note goes in which fret. Play around with this enough and it should start to sink in.

Thanks for reading and I hope this will help you in learning the fretboard on your guitar. If you have any questions or comments please feel free to leave them in the comments section below.

By The original uploader was Hyacinth at English Wikipedia (Transferred from?en.wikipedia?to Commons.) [GFDL or CC-BY-SA-3.0], via Wikimedia Commons