Hello and welcome to my Martin LX1E Review.

My first impression of this guitar was that it looked pretty cool. I knew it was going to be a smaller model guitar so the size wasn?t a surprise – it is quite a small guitar. I played the Ed Sheeran signature version of this guitar.

In this review I?ll discuss:

O.k. let?s get started with the sound.

I heard good things about this guitar but I?m going to be honest that I was a little disappointed with the sound. No it?s not a super pricey guitar but it?s also not bottom of the pile in terms of price.

The guitar is small so I certainly wasn?t expecting a big sound but I was expecting a little more than what I got.

The sound lacked resonance and I couldn?t extract much volume even when really giving it some. It definitely sounded small and a bit tinny/empty to my ear.

O.k. let?s take a quick look at the materials.

I only played this guitar unplugged. It apparently sounds better plugged in. But in my opinion a guitar should sound good acoustically first and foremost.

Was ok to play but not amazing and compared with the other guitar I played in the same session (in the same price range) it was not of the same standard.

The action was actually set up ok. A lot lower than I?m used to seeing on a new guitar especially at this price but that was a pleasant surprise – but even with that better set up it couldn?t make up for how the guitar felt.

It could have been lowered even more for my tastes but I don?t think that was going to be enough to make big improvements.

For me the size thing was a little bit tricky. I found it hard to play certain chords in the higher frets but if you have smaller fingers or just wanted this as a travel guitar this wouldn?t be a big deal. I could still play everything up there I just had to concentrate a little harder and this is something you would get used to.

The scale length is 23? which is definitely smaller than standard so less room to fit those frets in.

The nut width is a standard 1 11/16 inch (43mm). This is within the standard range – on the narrower side of standard but a lot of guitars – even full size dreadnought guitars have this nut width.

Due to its small size this guitar would be best for:

It would also be great as a travel guitar for anyone. It?s smaller size makes it easier to carry around.

I?m going to have to say no for this one.

Whilst it?s not a bad guitar by any means, I don?t think it?s worth the price tag. I just think there are quite a few better options out there for a similar price.

If you can pick one up for less than the going rate then it?s a good buy but I wouldn?t pay full price for this guitar.

I have a $150 guitar at home that I play regularly. Now I?m definitely not saying that this is better than the LX1E, but it?s not as far off as it should be for the price difference. 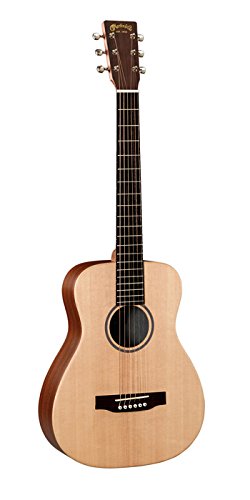 I don?t like to say anything bad about Martin Guitars because every single other Martin I?ve tried has been awesome but this one just didn?t do it for me sound or playability-wise.

Now that?s not to say that I wouldn?t have this guitar as a travel acoustic or that I wouldn?t get it for my kids to learn on because it would be more than suitable for those jobs and I definitely wouldn?t be unhappy with it.

But I personally wouldn?t buy it because I feel there are better options for the same price that can do the same thing. If it was a little cheaper then I?d definitely consider it. I did like the look of the guitar (especially the Ed Sheeran Signature Model) and it felt well-made but overall it didn?t do it for me.

Of course I am just one opinion and based on the user reviews for this thing I might be the odd one out!

Maybe part of the reason I didn?t like it was because of the other guitar I played in the same session, which was the Taylor GS Mini Mahogany. Now that would be an awesome buy for the price range in my opinion.

If you?re looking for other options in the under 500 price range then check out the link below.