You are here: Home » Sapele vs Mahogany: What?s the Difference and Which is Better?

So, in the battle of Sapele vs Mahogany, which is the better tonewood?

This, of course, as always, depends on your particular tastes – mostly. It should also be noted that Sapele on one guitar (with different materials and construction) will sound different to Sapele on another – and the same goes for Mahogany.

What is the Difference Between Sapele and Mahogany

You?ve probably heard these two woods compared a fair bit. Usually, when someone asks what Sapele is, the answer is invariably – ?it?s like Mahogany?.

And that?s true to an extent.

It is similar to Mahogany, and it?s fair to compare the two because Mahogany would be the closest to Sapele.

But they aren?t quite the same thing.

To better understand the differences between the two, let?s first take a look at each wood individually.

Most guitarists would have heard of Mahogany and it is a very popular back and sides wood and wood for necks. It is also?popular?as a top wood.

But what is Mahogany?

Mahogany is quite a broad term.

There are actually a couple of different woods that are referred to as Mahogany, when talking about tonewoods for guitars. These include:

African Mahogany (scientific names – Khaya anthotheca, Khaya grandifoliola, Khaya ivorensis, Khaya senegalensis) is harder than Honduran Mahogany and is considered to be the lesser version of Honduran Mahogany. Though to be fair, on most guitars it would be hard to make out the difference in tone when used as back/sides wood.

Whether you get Honduran Mahogany (probably more commonly referred to as Tropical Mahogany these days because it is sourced from a number of Central and South American countries now), or African Mahogany, the sound characteristics are going to be pretty close.

You’ll likely?notice the difference when used as a top wood – but not so much for the back and sides.

Taking into consideration that there are different types of Mahogany (and there?ll be different qualities too) Mahogany generally has the following tonal characteristics – all other parts of the guitar being equal.

Mahogany?s sound can be described as ?earthy? ?strong? ?beefy?.

When used as a back/side wood to compliment a brighter sounding top wood, Mahogany is good for mellowing out the brightness and adding some warmth and a stronger mid-range plus softening the highs and reducing the overtones.

Sapele is less heard of than Mahogany. A lot of guitarists, especially new guitarists might not have even heard of it. That said, it is becoming more and more widely used and it will likely be more known as time goes by.

That said, it is also sometimes mistakenly called Mahogany, which could also lead to less awareness of this wood.

Sapele comes from West Africa and its scientific name is Entandrophragma cylindricum.

Again, like with Mahogany, the sound that you can expect from a guitar with Sapele will greatly differ depending on other materials used, the builder, and whether or not it?s used as a top, back and sides or both.

All else being equal, Sapele will be a lot like Mahogany, to be fair, but with some subtle differences.

But this is only a subtle difference really. Enough so that you?d likely notice the difference on the top and maybe slightly when used as back and sides in place of Mahogany.

But it?s going to be closer to Mahogany than it is to say Rosewood.

To give some perspective the following is the hardness of the woods discussed here including Rosewood. This is the average hardness and an individual piece of wood will differ.

Of course, this hardness isn?t the only thing that determines the sound qualities. But this does give a good indication of how Sapele compares to Mahogany as opposed to Rosewood. 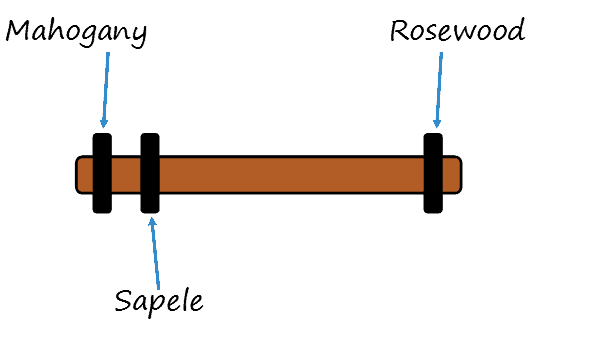 This of course doesn’t mean better or worse – it’s just to illustrate in terms of tonal characteristics how Sapele fits between Mahogany and Rosewood.

Both Mahogany and Sapele have warm, mid-range-heavy tonal characteristics with subtle overtones. Sapele then adds some extra high end into the mix.

They?re not exactly the same, tonally, but they are close.

I hope this post has helped you to learn the difference in Mahogany and Sapele. What?s your experience with these tone woods? Can you notice the difference?

Any other comments or questions welcome in the comments section below.