In my latest visit to my local guitar store I tried out the Seagull Coastline S6 guitar.

And what were my first impressions?

The guitar felt light, it felt like it was made from quality materials.

I purposefully don?t learn the materials a guitar is made of before I try it out so I didn’t know – but it just had that feel to it.

It certainly didn?t feel like a guitar that cost what it does.

What this Review will Cover

A quick note to mention that the coastline has a few different models – the one I tried was the 6 string with a Spruce top.

O.k. let?s get into the details.

The Coastline S6 had a nice even balanced tone. A tone that you wouldn?t have associated with a guitar at this price 10 years ago. But such are the technologies and efficiencies that are evident in today?s guitar manufacturing world that you can get an instrument with this kind of tone at this price.

Now don?t get me wrong you?ll still find cheap guitars with unbalanced tone, erratic dynamics and poor craftsmanship but mostly you?ll only find those in the really cheap range. That said you can still find junk in and around the $500 range.

Fortunately the Coastline S6 has a quality tone that has benefited from guitar making advancements.

It?s a dreadnought so it has that big sound and you can get some good volume out of it.

But it?s still nothing that gets out of control and you can easily control the dynamics between loud strumming and bringing it down to a?whisper.

On a warmness/brightness scale of 1-10 (with 1 being so warm it?s muddy and 10 being so bright it?s tinny and harsh) I would put the coastline at a 6.

Now, let?s take a quick look at the materials of the Coastline and see how they influence the sound.

So you know how I said I thought this guitar was a about a 6 out of 10 on the warmness/brightness scale? That?s what it was to me in real life but the first video here probably makes it sound brighter than that.

But this could be due to a number of factors, including the microphone he used to record it and the strings he has on it.

The second video it doesn?t sound as bright as in the first. This might be a good thing or a bad thing depending on your tone preferences.

Apart from my normal complaint of the action being too high, the Coastline S6 was actually surprisingly quite pleasant to play.

The action, like 99% of the time with any new guitar and especially so on cheaper models, was too high for my liking. But you may like it higher than me.

If you do like it lower then it?s something you can have adjusted so it?s no big deal.

With a lowered action I think this would be a pretty smooth guitar to play.

The width at the nut of this guitar is 1.8? (45.7mm). By modern norms this is wider than usual but still pretty standard. This is great for anyone who likes to have a little bit of extra room between strings. Not as?good for those with small hands.

The fretboard is made from rosewood which is a really good choice as a fretboard wood. Again, like the bridge, this is standard and wouldn?t expect anything less on a guitar of this price.

It?s a full size dreadnought size so probably not suited to kids or smaller players who aren?t used to a full dreadnought.

But the S6 series does come in a smaller concert shaped guitar and a much smaller parlour size which would be more suitable to kids and smaller players. Those sizes are only available with a cedar top.

The different models in the Coastline series are:

Anyone who likes a bright-ish tone that is tempered and not too?bright will love the sound of this guitar. It?s a nice mid-range tone. If you like things warmer then you could check out the Cedar top version which will produce a warmer tone.

It depends on your ear – some people find a warm tone to sound ?flat? or ?muddy? whilst others find it nice and warm. Others find a bright tone to be ?harsh? or ?tinny? and others find it bright and crisp.

In terms of styles, this guitar would cover most styles because of its mid-range tone and its dynamic range. Personally I?d go a little warmer for folk and in which case the cedar top would be great.

Finally we see if the guitar is value for money.

Definitely, in my opinion.

A few weeks back I tried the Seagull S6 Original. I would definitely say that the Coastline was a noticeable step up. Yes the Coastline series is also a price step up – but not by that much. And that small increase in price is worth it, in my opinion, for the step up in sound and playability.

The Coastline S6 is on the higher end of the under $500 range for sure, but the quality materials, the quality sound and the playability of this guitar is more than worth the price-tag. I?ve played guitars twice this price that weren?t as good. 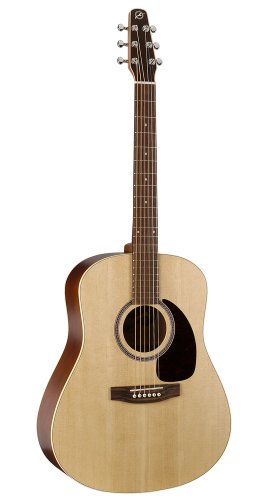 If this guitar is well suited to your needs and is within your budget range, then it would definitely be a great buy.

Thanks for reading and I hope you have found this review helpful.

If you are looking for other options for under $500 guitars – or want others at a similar price to compare the Coastline S6 to – check out the link below.