Hello and welcome to my Seagull Maritime Concert Hall review.

This review will look at Seagull?s Maritime SWS Concert Hall model in terms of: 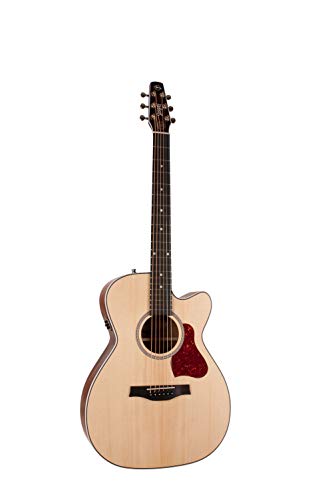 I?ll also provide video of the Maritime Concert Hall in action so that you can get an appreciation of the tone for yourself.

Both have the same materials pretty much ? the only real difference is the shape/size of the guitars (the Folk is also a High Gloss model whereas the Concert Hall is Semi-Gloss but that?s mainly aesthetics, IMO).

On a scale of warm to bright (1 being the warmest possible and 10 being the brightest possible) I?d say about a 6 ? the same as the Folk model.

This guitar is strong in the mid-range. It?s got some high-end shimmer but the mid-range is more powerful than the high-end. But it has more high end than low-end.

This guitar is a good all-rounder between strumming and finger-picking. It doesn?t sound its best when really giving it some on the strum ? it prefers a slightly lighter touch ? great for finger-picking and for moderate strumming.

Where the folk model has a very classical guitar-esque shape, the Concert Hall model has a more unique shape. It?s the equivalent of Martin?s 000/OM size but the shape is a little different looking.

The waist is very defined ? as opposed to the dreadnought model which has a wide undefined waist. It?s even more defined than the Folk model.

The dimensions of the Concert Hall Model compared with the Folk & Dreadnought models are shown in the table below:

As you can see, it has a wider upper bout and lower bout than the Folk model with a narrower waist, a shorter body length and a shallower body depth. Everything is smaller than the dreadnought.

There are two models of this guitar ? one that comes with in-built electronics and one that doesn?t. The difference in price is around $100.

The model with electronics is Godin?s QIT electronics which has an in-built?tuner. This uses a single source under the saddle pick up.

The video below shows the Maritime SWS Concert Hall being compared to a Simon & Patrick guitar (which has Rosewood back and sides).

In my opinion the Seagull has that more balanced mid-range dominant sound and the Simon and Patrick has a more scooped sound – stronger high and low-end but scooped mids. It has an overall brighter tone to it. This is largely down to the Rosewood back and sides vs the Mahogany back and sides, IMO.

To my ear, I prefer the more mid-range heavy sound of the Seagull – but a lot of people prefer that brighter more rosewood-esque sound. Everyone perceives sound differently.

Though I have to say I did prefer the Simon & Patrick when recorded through the pick up – but that’s down to a better pick up system on that guitar.

O.k. now onto the important task of assessing the playability.

O.k. some people prefer a high action – and so I can see why most guitars start out life with an action that is higher than I like it – it’s much easier to lower it than it is to raise it. I get it 🙂

The nut width on this guitar is 1.8″ (45.7mm). This is quite a wide neck for an acoustic guitar, which is something that quite a few Seagull models have.

This is great for finger-picking, IMO, but can make chords more difficult for those with smaller hands.

I didn’t personally notice chords being more difficult but I can see it being the case for smaller hands.

The fingerboard is made from Rosewood, like with all Seagull guitars. No complaints there, it’s a great material for fingerboards.

The scale length on the Maritime SWS Concert Hall is 25.5″ (648mm). This a standard scale length and is the same as what is on the dreadnought models. The Folk model has a 24.84″ (631mm) so it’s slightly reduced on that one.

This guitar is most suited to anyone who is looking for that tone that is mid-range heavy but still has some decent high-end and that isn’t overly bright but not super-warm either. Something that’s a good balanced middle ground. 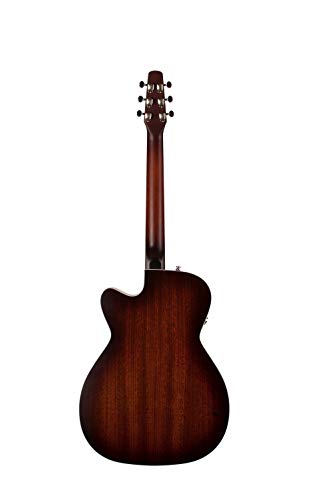 It’s also a good all-rounder in terms of using it for strumming, flat-picking and finger-picking – so if you like to do a bit of everything, it’s a good choice. Maybe just leaning towards finger-picking just because of that wider neck.

Also, if you have an aggressive playing style and like to really hammer out those strums, then this probably isn’t the most suitable for that – something with a bigger body would probably be a better bet.

You can’t really say that this isn’t value-for-money. It has a solid top, solid wood back and sides and other quality materials – and all for less than $700 ) for the model without electronics.

But in saying that, I didn’t have an aching desperation to take it home with me either. It’s a solid, balanced and quality instrument ‘ but it didn’t blow me away tone or playability-wise.

But without doubt it’s value for money. It’s the lowest priced all solid wood guitar that I’ve played.

If you’re interested in learning more about the Maritime SWS Concert Hall or if you are ready to buy or want to research prices and availability, check out the links below.