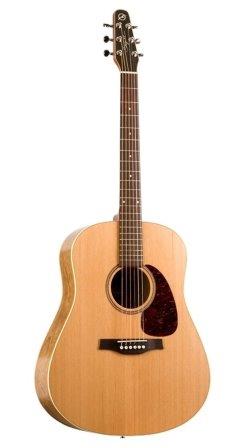 I was down at my local music store today to try out some guitars and one of the guitars that I tried was the Seagull S6 Original Slim Guitar.

I?d heard good things about this guitar and, knowing how good the Artist Mosaic is, I was looking forward to jamming on the S6.

Contents hide
1 What This Review Will Cover
2 The Sound of the S6 Original
2.1 The Materials of the S6
2.2 Learn more in the video below
3 The S6 Original Slim?s Playability
3.1 The Action
3.2 The Fretboard
3.3 Neck Width
4 Who This Guitar is best Suited to
5 Value for Money
5.1 More Info and Where to Buy

What This Review Will Cover

So, in this review I will:

The Sound of the S6 Original

The S6 is a dreadnought shape so naturally it has quite a loud boomy sound to it. I didn?t think this was more so than your average dreadnought and the sound was easy enough to control and had?a good dynamic range.

If I was to think of the sound of a guitar from warm to bright on a scale of 1 being the warmest and 10 being the brightest I would give the S6 a 4. It?s slightly on the warmer side but bright enough.

The Materials of the S6

Learn more in the video below

The first video here will give you more info on the guitar and some idea of the sound. A lot of this is covering the S6 Original in general but the S6 original slim will sound the same it?s just the neck is slimmer on the slim version.

O.k. so listening to the guitar through a video isn?t going to give you an exact representation of what the guitar will sound like but it should give you some impression to see if it?s the kind of tone that you like.

This next video is all just the guitar being played so you can get more idea of the sound.

O.k. so how did the S6 play? I will talk about the playability in terms of both my experience, the materials used and the specs of the guitar.

My first impression of the S6?s playability was straight away that the action was definitely too high for my liking. This made it a bit of an effort to play and I felt it was a little slow and more difficult to slide and bend (which is natural byproduct of a high action).

But this I find is often the case on new guitars, particularly on cheaper guitars.

It is after all easier to lower the action than it is to raise it. So, if you like your action on the higher side, then the S6 might be just right for you out of the box but personally lowering the action would be the first thing I would do after buying this guitar.

The fretboard (a.k.a. fingerboard) is made from rosewood. This is a great fretboard material and it was, like most rosewood fretboards, nice to play on ? I just wish that it was closer to the strings! (see action above).

The S6 Original Slim comes with a slimmer neck than the S6 Original. In fact this is the only significant difference between the two models.

To be honest most of the guitar?s that I see these days tend to have a 43-44mm nut width so the ?slim? model is really quite a standard width ? and the Original is probably slightly wider than the average dreadnought guitar these days.

That said, I found the neck felt really nice and the width of the neck?felt just fine. This width is fine for any player and will be particularly nice for those with smaller hands.

Who This Guitar is best Suited to 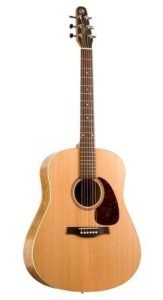 Being a dreadnought guitar then anyone playing rock, pop, country, blues, bluegrass will be well suited to this guitar. Also best suited to strumming and flatpicking. You can certainly finger-pick on it if that’s something you do occasionally?but there are better options if that’s your bread and butter.

This is also a great guitar for beginners. It is reasonably priced but is of a high enough quality that a beginner will be able to learn quickly on it and won?t be frustrated by it ? provided the action was adjusted for them!

Ideally it would be a smaller shape for beginners but otherwise is almost the ideal balance of price and quality for the beginner.

Probably not the most suited guitar for kids ? as it?s a full size dreadnought it may feel too big, which can make it more difficult to play.

Of course I can?t say this for sure, without actually having lowered its action,? but I have a strong suspicion that if the action was set up better on this guitar (a relatively easy thing to do or to have done) then it would be?considerably nicer to play. But I don’t think it would enough to make me want this guitar for myself.

However, my tastes run in the more pricey range and this guitar is definitely pretty high quality in terms of tone and pretty decent in terms of playability and for a price of around $400 you are getting your money’s worth. I would say that this guitar is priced just right for what you get.

If you are keen to learn more about Seagull’s S6 Original Slim, or if you’re ready to buy, or want to research current prices and availability, check out the links below.

If you want to check out some other under 500?options or want to see how the S6 Original Slim?compares to other guitars in this price range, check out my top 5 guitars under 500?at the link below.
>> Six String Acoustic’s Top 5 Guitars Under 500