You are here: Home » Sitka vs Engelmann Spruce for Guitar Tops: Which is Better? 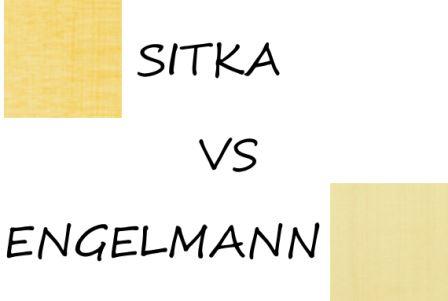 So why write a post about Sitka vs Engelmann?

So if you?re debating between a guitar that has Sitka or Englemann Spruce as the top, read on to see which might suit your needs better.

Context for the Englemann, Sitka Choice

Whilst it is true that Englemann and Sitka have different sounds qualities, and one may be more suited than the other for a particular purpose, it?s also true that the points below will hold true to varying degrees.

What do I mean by that?

Well ,if all else was equal, then the difference between Engelmann and Sitka is profound. But that assumes that the bracing is the same, the back and side woods are?the same etc.

Elements other than the top also have a big influence on tone, dynamics, sustain etc.?So, one Engelmann topped guitar may sound closer to a Sitka topped guitar, if the two are quite different in other ways (such as back and sides and bracing) than it would if everything else was the same. Or it might sound even more different.

O.k. with that out of the way, let?s take a look at the qualities of each top wood and what those qualities are best suited to.

It is native to North America. European Spruce (also known as German Spruce – even though it typically doesn?t come from Germany these days) is sometimes also called Engelmann Spruce – however, this is a different (though similar) species.

Engelmann has a creamier, whiter color to it than Sitka (hence the sometimes nickname, White Spruce).

You can get Engelmann in different grades including AAA, AA, A and 2nd grade. The quality of the wood will also affect how it sounds.

The Tonal Qualities of Engelmann Spruce

Engelmann is lighter weight and less stiff than Sitka – this allows the top to vibrate more (limited of course by other factors – particularly binding).

This, among other things, means that the overtones produced are stronger and richer than they are with Sitka spruce. It?s a more complex tone and the mids are stronger than Sitka too – giving a slightly smoother sound. It’s a less compressed sort of sound too because of those extra vibrations.

What does this mean for Who It?s Best Suited to?

The biggest thing that this means is that – it?s going to produce a different sounding tone – and if you prefer that tone then maybe Engelmann is for you.

But you?ve also got to think about how you play.

Engelmann will produce quite a different tone depending on if you play guitar softly or more vigorously. Because of the larger vibrations and the abundance of overtones, Engelmann will help a softer player produce a richer, more dynamic tone.

However, if you play too aggressively?on Engelmann (all else being equal of course) the sound can become a bit washy. What I mean by that, is that the sound won?t be as clear and defined.

So, as well as tonal preferences you should also consider the way you play guitar.

Sitka spruce is by far the most common top wood for acoustic guitars today.

And for good reason. It is a very versatile wood. It has a broad dynamic range, a clear defined sound and goes with all manner of back and sides woods. You can play loud and you can play soft and Sitka remains consistent.

It?s strong and elastic and can handle plenty of abuse from the less careful guitarist and guitar builder a-like.

Like Engelmann, you can get Sitka in different grades and the better the grade the better the sound – generally speaking. Some grades you might come across are AAAA, AAA, AA, A, and 2nd grade.

The Tonal Qualities of Sitka Spruce

Sitka is heavier and stiffer than Engelmann – this produces a more controlled, more consistent, more compressed kind of sound.

There are less overtones and there is less complexity going on – which means that whether you play loud or soft you get a clear, more defined sound than you do with Engelmann.

No surprise then that it?s the most common top wood.

Does this make it better than Engelmann – not at all. For some guitarists and some purposes, yes – for others, no.

What does this mean for Who It?s Best Suited to?

There isn?t really a guitarist that isn?t suited to Sitka – which is what makes it such a popular option.

Of course it will depend on your tonal preferences most of all. If you like the sound of Sitka (and again that sound will differ greatly depending on other factors such as binding, back and sides wood and the size and shape of the guitar) then it?s a great choice.

In terms of playing, it?s great for a wide range of players from soft players to more vigorous players. If you move between playing softly and playing harder a lot (as a lot of guitarists do) then it?s an awesome choice.

If you typically play on the softer side then I would suggest giving Engelmann a try.

Check out the link below to read a discussion?between some that prefer Engelmann and some who prefer Sitka.

>>Do you Prefer Engelmann over Sitka – Acoustic Guitar Forum

I hope this post has helped you to learn more about the differences between Sitka and Engelmann spruce and helped you to decide which might be better for you. Remember that the best way to tell is to hear and play it for yourself.