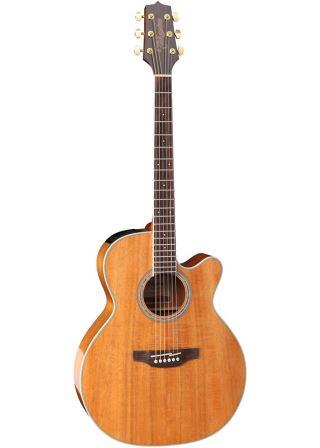 Hello and welcome to my Takamine GN77KCE review.

This review will look at Takamine’s GN77KCE in terms of:

This guitar has a nice balance between being bassy enough but with some clarity and thickness to the highs and enough mid-range presence.

I would say that it’s on the brighter side but not overly bright. I’d say about a 6/10, if 1 was the warmest and 10 was the brightest.

If it was solid Koa, I would say that this would get warmer with age but I’m not sure if the same is true with a laminate construction.

The GN77KCE has some decent bass coming through but it’s not overly dominant – there’s still a mid-range in there and the highs come through too. It was a nice balance. Not the kind of tone that blows you away but nice and balanced.

It’s got a narrow nut-width which is perhaps more suited to strumming and flat-picking than finger-style but that’s more of a playability thing.

The GN77KCE has Takamine’s NEX body. This is like a scaled down jumbo – close in size to a grand auditorium.

The NEX bodies that I’ve played have produced a really nice balanced tone. It’s a shape that I like.

The GN77KCE comes with Takamine’s own TP-4TD preamp and has a built-in tuner and 3 band EQ settings.

I liked the feel of this guitar. Somehow it didn’t feel quite as nice to me as the Takamine P1NC that I also played in the same session but I’m not exactly sure why. But still, it was overall a very easy and smooth feeling guitar.

The action is a little bit on the high side – but not hugely and compared to most off the shelf it was set up pretty well. It’s a good idea to do your own set up anyway to customize it to how you like it to feel.

The neck has Takamine’s asymmetrical feel to it – which I really like. This basically means that the neck is a bit thinner on the bass side. This is supposed to be a more natural fit for a hand. Whatever it is, it felt nice to play to me.

The nut width is 1.673″ (42.5mm) which is just a little narrower than the average width. This is great for chord constructions, especially for those with smaller hands but it was still nice enough to play finger-style on.

The fretboard is made from Rosewood and that’s no surprise – as it seems that 90% of guitars out there have rosewood fretboards! But that’s just fine as Rosewood typically makes for a good fretboard.

Of course not all pieces of wood are the same – but this felt fine. It was nice and smooth feeling.

In the same session, I played the Takamine P1NC from their pro series 1. I loved that guitar.

The GN77KCE wasn’t in the same league as the P1NC, in my opinion – I liked the GN77KCE but I didn’t love it, like I did with the P1NC.

But I wasn’t expecting to like it as much either. In some cases I actually prefer a guitar that’s cheaper – sometimes they can just sound nicer but in this case the difference in price faithfully represents the difference in quality (for my tastes anyway).

But just the way that the P1NC was to play, I would pay the extra, personally. Not that this is a like-for-like comparison, of course, as both guitars feature different tone-woods.

If you’re interested in the GN77KCE, are ready to buy or want to check out prices and availability, check out the links below.