Hello and welcome to my Taylor 110e review. In this review I will assess the quality of the guitar based on its cost and in comparison to other acoustic guitars of a similar price.

To get the best idea of how a guitar will sound and how it will play it’s a good idea to look at it from a few different perspectives.

For that reason in all my reviews I like to:

I will also give you my opinion on how the guitar played but showing you multiple opinions is more informative as this will give you a better overall picture of whether this guitar is for you or not.

Given the price of the Taylor it cant be expected that it will have the best and rarest woods and hardware materials.

However at the price you do expect something decent in the way of materials. I think the Taylor have gotten the balance just right with the 110e in terms of price and makeup of the materials.

The Top: The 110e has a solid Sitka Spruce top (soundboard). This is pretty much the standard for tops these days due its all round qualities. It is flexible but strong and produces a balanced range in terms of both tonality and dynamics.

The combination of the Sitka Spruce top and Sapele laminate back & sides (see below) gives you a balance of top end clarity and snap from the Sitka top and the mid tone warmth of the mahogany-esque Sapele laminate.

I found the tone to be well balanced and whilst it didn’t hugely sing in terms of sustain, it was a very controlled, balanced tone and very consistent.

Back & Sides: The back and sides are made from Sapele Laminate. Whilst laminated wood isn’t the ideal option, costs have to be saved somewhere on a $600 guitar – and if you have to make a compromise somewhere then back and sides is probably the place to do it.

Sapele laminate is like a poor man’s Mahogany. In other words it’s used to attempt to replicate the sound of Mahogany but at a much cheaper cost.

Neck: The neck is made from Mahogany which is a great material for necks so no problems there.

Bridge wood: The bridge of the 110e is made from ebony. This is a great choice for the bridge because it is a hard and dense material and this helps to transfer the energy from the vibrations of the strings into the soundboard.

But you also don’t want the bridge to be too heavy. In my opinion (and in most guitars) Ebony and Rosewood are the best bridge materials so the 110e gets the tick from me here.

Bridge Pins, Saddle & Nut: The bridge saddle, pins & nut are all made from TUSQ, which is a synthesized material that is made to replicate bone. Whilst some swear by bone others think TUSQ is just as good and in some ways better as you can control the consistency in a synthesized material.

I wonder what this guitar would sound like with bone in place of the TUSQ and whether that would increase the sustain.

If you really want bone or some other material for your nut and bridge saddle then this might be something you can look into to getting changed on the 110e but the TUSQ does a pretty good job in? my opinion – how much difference bone would make could only be told once you changed it.

For more info on different guitar materials, check out the “how to” menu above.

The first video below is a great because you can hear both the 110e and 114e in the same setting. Also the guy in the video plays the guitars both unplugged and plugged in – perfect!

This next video is a quick one of a dude playing the 110e unplugged.

This guy plays it more aggressively so you can get an idea of how it will sound with that aggression.

Fingerboard: The 110e has an Ebony fingerboard (fretboard). Ebony is typically seen on more high end guitars so you get value with ebony which is perfect for both fingerboards and bridges.

Keep in mind though that, like all woods, that one piece of ebony won’t be the same as another. There will be different levels of quality – it’s unlikely that Taylor are using the best ebony they can get their hands on for this guitar but it still makes for a nice playing surface for your fingers.

Action: Unlike some cheaper guitars and other mid-range guitars, the action on the 110e is set up pretty well from the get go so you may not have to put in that extra effort adjusting the action (or extra cost of having it adjusted).

That said I felt like it could be a tad bit lower. I found a little bit that when you started to play barre chords towards the higher frets that it required a little bit more effort than ideal. Not bad at all but if you like a lower action then it may be something that you would consider getting done if you bought this guitar.

Neck Width: The 110e has a slightly smaller than standard neck-width at 1 and 11/16 inches. This makes it slightly more difficult for finger-style playing but will be easier to play for those with smaller hands or those who like the feel and playability of a narrower neck.

I really liked the feel of the narrower neck and I didn’t feel that it affected my finger picking at all. The neck felt light and strong. Really nice to play on.

Strings: You also shouldn’t need to change the strings as the guitar comes with a decent set.

From what I’ve seen it usually comes with NANOWEB Coated Elixir Light Gauge or Medium Gauge Strings. I’m pretty sure the ones I played on were medium gauge.

Though you might want to change them anyway if have favourite strings you want to put on. Or you might prefer a different string material or gauge. But you could definitely just play it with the strings as they are.

Features and other info

Acoustic-electric: The 110e comes with an inbuilt pick-up (the e in the name means it is set up with electronics) so you can play it plugged in or unplugged. It seems like it has a decent pick-up system so if you do play plugged in sometimes this should accommodate that well.

I only tried it unplugged but there is a video below that demonstrates the sound both plugged and unplugged.

Other Shapes: The 110e is part of Taylors 100 series. The 100 is the series (which is pretty much the wood and material combination used) and the 10 represents the shape as being a dreadnought shape.

You can also get the same guitar in the Grand Auditorium shape. This is the 114e. Whilst this is made from the same stuff it will sound different due to the difference in shape. Again see the first video below which demos both the Dreadnought and Grand Auditorium versions.

I had a brief play on the 114e and I didn’t hear too much of a difference in sound – a little bit less bassy and a little less oomph than the dreadnought as you’d expect- due to the larger soundboards on dreadnought shapes.

However, I did find that it wasn’t quite as nice to play as the dreadnought. I couldn’t put my finger on what it was, and maybe it was psychological, or perhaps the strings were different. It was nice to finger pick with but left hand fretting wasn’t as nice.

In addition to the 114e you can also get cutaway and 12 string versions.

The following are available in the 100 series:

The 110e being a dreadnought is most suited to strumming and flat-picking but of course you can use it for finger-picking too if it’s not your main stay.

If you do more finger-picking than strumming/flat picking and you otherwise like the guitar then the 114e might be a better choice – although I would probably go for a different guitar altogether if you mostly play finger-style.

The 110e is a great mid range all rounder. It would work well as a beginner guitar (if you’ve got the budget for it) or for your second guitar.

It would also be a good extra guitar to have if you are a more serious musician but want something in a different tuning, with different strings or just to have something else to play or take with you for gigs or on holiday where you don’t want to risk your more expensive guitar.

For the price I would definitely give the 110e a thumbs up for value for money. It comes under my under $1,000 series of reviews but it’s pretty close to fitting in the under $500 category with a street price of around $599 (MSRP $798).

For that price you get an Ebony fretboard and bridge, a solid Sitka Spruce top and Taylor’s quality of construction. It would be tough to find something better for around $600. It has a really balanced and consistent tone and a nice feel playability-wise.

If you’re interested in the Taylor 110e check out the links below for more info and for current prices. 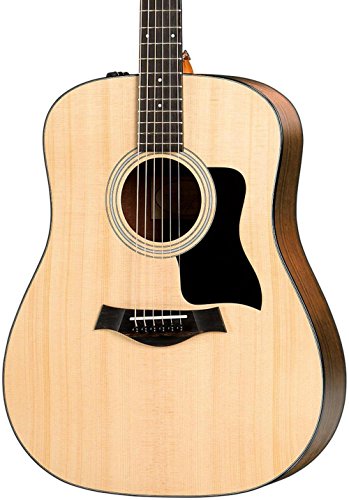 Whether you like the sound of the 110e is as much personal preference as anything – but if you do like the sound then there is no reason not to go for the 110 if you are looking for something in that $500 to $1000 price range. If you are keen to check out some other great options in that price range check out my top 5 acoustic guitars under 1,000 post at the link below.

Thanks for reading and I hope this review has helped in your search for your next or first guitar.

If you own or have played the 110e it’d be awesome to hear what you thought of it. Just leave a comment in the comments section below. Any other comments or questions very welcome too.