I recently played Taylor?s 114ce and 214ce side by side to get into the nuts and bolts of what the difference really is between these two similar guitars.

The 2 models are very similarly built but do have some distinct differences.

Contents hide
1 All the Differences
2 The Significant Difference
2.1 What Difference Does the Back and Sides Wood Make for These Guitars?
2.1.1 The Method
2.1.2 My Findings
2.2 My Conclusion
2.2.1 Is One Better than the Other?
2.3 Over to You

As you can see above there a lot of similarities between the two.

On the face of it, there area also a reasonable number of differences. However, of the 6 differences above, only 1 of those is truly significant.

Numbers 1 through 4 of the differences above are essentially aesthetic differences and number 5 is outside of the guitar itself.

The most significant difference is the back and sides wood used.

What Difference Does the Back and Sides Wood Make for These Guitars? 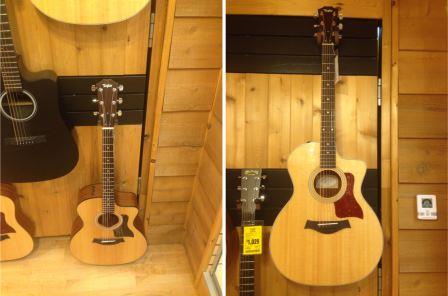 This was the main question I was seeking to answer when playing these two guitars together.

When playing the guitars separately I could notice the difference ?- but I couldn?t quite put my finger on what that difference was exactly.

But when I was able to hear them immediately one after the other, I could place the difference more accurately.

The 214ce had more clarity between the notes with more emphasized lows and crisper clearer highs. The sound was overall brighter than on the 114ce.

The 114ce had a warmer tone that was more mid-range heavy and was a more compact kind of sound.

This is exactly what I would expect the difference to be between the 2 back and sides woods.

The major difference between these two guitars is the back and sides materials.

Is One Better than the Other?

In my opinion, no.

Some prefer a crisper, brighter, clearer sound and others prefer a warmer, more compact sound.

In my experience more people prefer that Sitka Spruce/Rosewood combination than people who prefer the Sitka/Sapele sound. But that doesn?t make it better and the sound quality is in the ear of the beholder.

A lot of the time I actually prefer the more subtle, warmer tone that Sapele or Mahogany bring to the table. And often it depends on the style you?re playing and the sound that you?re after for a particular piece of music. Sometimes I would prefer a sound more like that produced from a Rosewood/Spruce combo and other times other wood combos are more suitable/sound better.

Of course it should be remembered that neither of these guitars is particularly on the extreme ends of tone ? they have a very subtle difference. But neither is better than the other.

Thanks for reading and I hope this comparison has helped you to learn more about the differences between the 114 models and the 214 models.

If you do prefer that warmer kind of tone, then the 114ce will be a better choice for you and as a bonus you?ll save a few dollars.

If you prefer the?clearer brighter tone of the 214ce, then that?s the guitar you should go for.

But the 214ce isn?t necessarily a better guitar just because it?s in a higher series or priced higher. Typically, rosewood is priced higher. And with the 214 models you get a hard bag rather than a soft bag so that also bumps up the price a bit.

If you want to learn more about each guitar check out the links below.