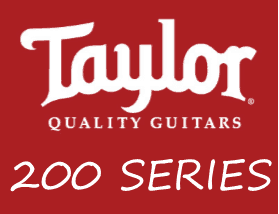 A couple of weeks back I posted an overview of Taylor?s 100 series. So I thought I?d do a follow up that post by looking at the Tayor 200 series acoustic guitars.

Before we get started looking at each guitar let?s see what the names stand for.

Starting with the dreadnoughts we?ll first look at the 210ce model.

>>See My Full Review of this Guitar

Going through the specs?I wanted to see how this might differ from the 100 series equivalent – the 110ce.

They are very similar guitars with the main difference being that the 210ce has layered rosewood back and sides compared to the 110ce?s layered Sapele back and sides. Otherwise the only other (small) differences are:

Apart from the back and sides and those 6 small, mostly cosmetic, things this guitar is the same as the 110ce.

I was?curious to see if there is any notable difference in sound or playability in these two guitars. So I played?these two together at my local?music store to see for myself. The 200 series versions definitely had that “rosewoody” tone to them. The highs were brighter and more pronounced and the lows were also more pronounced – the 110ce was more mid-rangey.

I discuss the differences in more detail in the post at the link below.

The major differences between this and the 210ce is that the 210 DLX:

And this is why this is also the cheaper model.

The DLX model does have some other minor differences which make it the ?deluxe? model.

Again these are only minor things. The major difference is the electronics and the cutaway – though it is good to get that hardshell case with the deluxe model.

Literally the only difference between the 210e DLX and the 210 DLX is that the 210e DLX is fitted with the Expression 2 System electronics.

You could also look at this as the deluxe version of the 210ce.

Whether you went with this one or the 210ce would depend on whether you thought it was worth the extra $270 for those little extras you get with the deluxe version – the major thing for me is that the deluxe comes with a proper hard-shell case.

The other small difference is that the binding is cream colored rather than white.

Now let?s take a look at the Grand Auditorium models.

The only difference between the 214ce and the 210ce is the shape/size.

But this is a fairly significant difference.

Neither is better than the other but they will produce different tone, sustain, volume etc. so it comes down to the sound and feel that you like better.

The 214ce is a grand auditorium shape as opposed to the 210ce?s Dreadnought shape. Taylor?s Grand Auditorium shape has a more defined waist between the lower and upper bouts compated with the dreadnought.

Check out the differences in size in the table below:

Wait, what’s the difference!? So there’s no actual difference in those specs – it’s the shape that makes the difference. As you can see in the image above the Grand Auditorium has a narrower waist than the dreadnought models.

The last of the 6 string models in the 200 series is the 214ce-BLK DLX. The differences between this model and the 214ce DLX are mostly cosmetic – like with the sunburst model above. Those differences are:

Finally we come to the 254ce DLX. This is the only 12 string model in the 200 series. It is most similar to the 214ce DLX, having a Grand Auditorium Shape with cutaway plus electronics. Practically?the only difference between it and the 214ce DLX, is that it is a 12 string guitar.

The other major difference is a wider neck to accommodate the extra strings.

The other small differences are (mostly to accommodate the fact it?s a 12 string guitar):

The pricing above is the MSRP – which is usually above what the typical actual price is (when it comes to guitars).

A more accurate pricing would be closer to:

I hope this post has helped you to learn more about Taylor?s 200 series acoustic guitars and that you now know if any of the 200 series guitars are suitable for you.