Hello and welcome to my Taylor 214ce review.

This review will look at the 214ce in terms of: 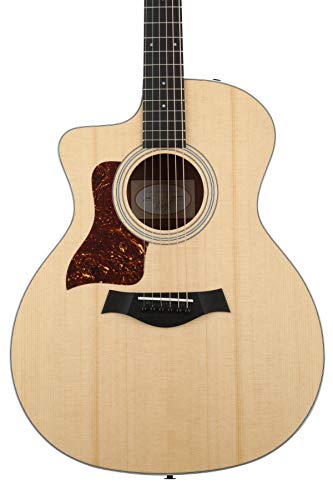 *image above is left handed version of the 214ce

I’ll also provide video of the 214ce in action so that you can get an appreciation of the tone for yourself.

The 214ce is Taylor’s Grand Auditorium model and the 210ce is the Dreadnought model. I personally preferred the sound of the 214ce overall. It was a more tonally balanced sound and sounded good whether I was strumming, flat-picking or finger-picking.

The 214ce has a Sitka Spruce top and Laminate rosewood back and sides and that combination, as it tends to, helps it to produce a bright tone with clarity in the high end and at the low end. I found the 214ce had good clarity of sound and you could really hear everything that was going on clearly, when you played it – and in every style as I mentioned before.

It certainly wasn’t so bright that it was unpleasant. I’d say on a scale of warm to bright – with the warmest being 1 and the brightest being 10, the 214ce was a 7.

It definitely has some volume to it and also good sustain.

The 214ce is fitted with Taylor’s Expression System 2 electronics.

Check out the videos below. These should give you some idea of the sound – though it won’t represent perfectly the sound of the instrument in real life.

I found the 214ce to be a really nice guitar to play. I do like the feel of an Ebony fingerboard and the action was almost where I like it.

Compared to the average guitar off the shelf I found the 214ce had a reasonably low action. Personally I’d still tweak it a little to make it lower – but some would be happy with it just the way it is.

The fretboard is made from ebony. Personally this is my favorite fretboard wood, so definitely no complaints from me there.

The 214ce has a 25.5″ (648mm) scale length. This is essentially full length and it felt fine to play for me and works well with this sized guitar. A beginner might want to go with a smaller guitar with a shorter scale length to make it easier on their fingers.

What Could be Better?

O.k. so this review has been pretty positive overall – and justifiably so as this was a very nice guitar to play both in terms of sound and playability – but no guitar is perfect of course.

So what could the 214ce do better?

Is this a Better Choice than the 114ce?

It really depends on the sound that you are after.

The two guitars are quite similar in a number of ways with the only major difference being that the back and sides wood of the 114ce is laminate Sapele as opposed to the laminate rosewood on the 214ce.

I played the 114ce and 214ce side by side and you can definitely notice the difference because of that back/sides wood. The 214ce is brighter and has louder more pronounced highs and more pronounced lows.

Whereas the 114ce is more mid-range dominant – not so much as say a mahogany top might produce but more so than the 214ce.

So which one you go for will depend on your tone preferences. If you prefer the tone of the 114ce you might save a few dollars.

This guitar is best suited to anyone, first and foremost, who likes the Sitka Spruce, rosewood tonal combination.

Assuming that you do and that it is in your budget range, then the ideal guitarist for this guitar would be an intermediate to advanced level guitarist who likes to play a bit of everything from flat-picking to strumming to fingerstyle.

If you prefer just strumming and flat-picking, then I’d go with the 210ce (the Dreadnought version) and if you mostly play fingerstyle, then a Concert size acoustic guitar might be a better choice for you. Note that there isn’t a Concert size option in Taylor’s 200 series.

Not really for the beginner – firstly, because of the price and secondly because it’s a big acoustic, with a full scale length and wouldn’t be the easiest for a beginner to learn on. That said, it wouldn’t be the hardest by any means, because it does play smoothly – but I’d suggest a cheaper option that will do the job just as well for a beginner.

The MSRP for this guitar is $1,328. However, from my recent research, you are likely to be able to find it for less.

For the fact that you are getting a quality built guitar with great tone and nice playability and that you get a cutaway and electronics included, I think this is a just price for this guitar. You could spend more on a less quality instrument, in my opinion. 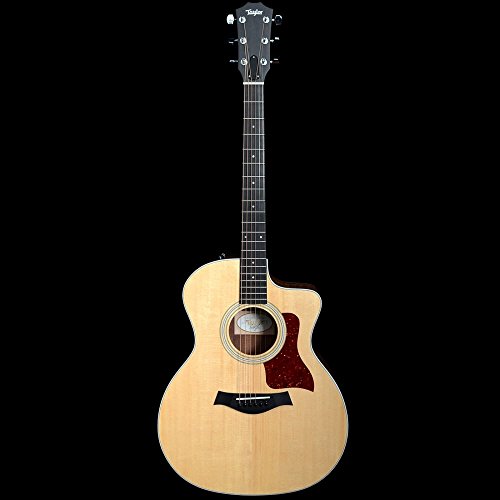 If you’re interested to learn more about the Taylor 214ce, are ready to buy or simply want to research current prices and user reviews, check out the link below.

Thanks for reading and I hope this review has helped you to learn more about Taylor’s 214ce guitar.