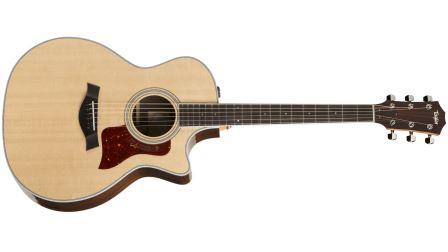 Hello and welcome to my Taylor 414ce Rosewood review.

This review will look at Taylor’s 414ce-R in terms of:

I’ll also provide video of the 414ce-R in action so that you can get an appreciation of the tone for yourself.

The 414ce-R has that sought after Spruce/Rosewood tone in spades.

You really get that rosewood sound in a big way when playing this guitar – some very defined sustained bass and some thick trebles with mids that are almost non-existent. It’s got that very low/high thing going on, with the scooped out mids.

And there is no shortage of overtones and complexity going on either. It’s very crisp, bright and defined tonally.

This allows you to be very expressive with this guitar.

Comparing it to Taylor’s 214ce it is very obvious the difference the solid rosewood makes when compared to laminate rosewood. There is no comparison. And that’s the main thing that you pay for with this guitar over the 214ce.

The 414ce-R is in Taylor’s Grand Auditorium shape. This is a nice mid-size guitar and a good all-rounder shape, that is equally as good for strumming, flat-picking and finger-style.

This particular model comes with a venetian cutaway but you can also get the 414e-R which is the same in every way except without the cutaway (and a slightly lower price).

This guitar is quite bright sounding – but certainly not in a shrill way – the definition between notes is outstanding and it’s very high and low dominant without too much in the way of the mid-range.

But those highs aren’t harsh or tinny – they are thick and pleasant.

On a scale of warm to bright, with 1 being the warmest and 10 being the brightest, I would say that this around a 7 or 8.

This system features a behind the saddle pickup rather than your traditional under the saddle pick up. Positioning the pick up in this way is supposed to more naturally reproduce the sound of the guitar through an amp or PA.

These aren’t the perfect representation of the guitar by any means but gives you something more to go off.

A quick one to start

And another quick one – but this time with some fingerstyle.

Taylor guitars are pretty consistent across their line in terms of playability and the 414ce-R is no different. It has that reliable, nice playability that Taylor are known for.

As pretty much is always the case, I would lower the action a bit if bought this guitar. But it would be very subtly and I enjoyed playing this guitar where it was – I’m just fussy!

The fretboard is made from ebony. This is my favorite fretboard wood, so definitely no complaints there. It felt smooth and nice to play under the fingers.

The 414ce-R is best suited to anyone who really wants that Rosewood sound and wants it in a big way – and wants it for a price that is a little bit friendlier than a lot of all-solid wood Sitka Spruce/Rosewood guitars.

Also, if you’re someone who likes to mix up their styles and really do a bit of everything including strumming, flat-picking and fingerstyle, then this is a great option for that all-round ability.

When you’re paying this much for a guitar it’s hard to say the words value-for-money, when you can compare a guitar that’s half the price and could possibly like it better, depending on your tastes.

For example, if you prefer a warmer sounding guitar – you might prefer a $1,500 guitar that uses Sapele or Mahogany or Cedar for example – and not pay as much.

But, if you’re after that true rosewood tone, then this guitar actually is value for money.

To illustrate this, let’s take a look at a couple of other all solid wood Spruce/Rosewood combinations.

Let’s take the 814ce – Taylor’s 800 series equivalent. In that case you get different bracing and you otherwise get some mostly cosmetic differences – but it adds an extra $1,500 to the MSRP.

Or we could look at Martin’s 00028 – Sitka Spruce top and Indian Rosewood back and sides – but you’d have to add more than $600 to the price for that.

I’m not saying it’s the lowest priced Spruce/Rosewood guitar going around but it’s certainly a good price for this type of guitar. And you get more

If you’re interested in Tayor’s 414ce-R, are ready to buy or want to research current prices and availability, check out the links below.