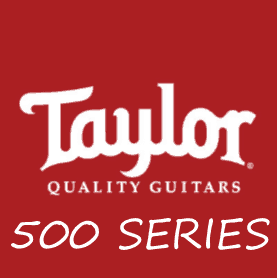 This post is going to take a quick look a the guitars in the Taylor 500 series.

I will take a look at the specs and the differences between each guitar in the series. Naturally, each guitar will have a lot of similarities, being part of the same series, but each guitar is different in some way.

The 500 series offers a good number of options, so if you think this is the kind of guitar you are after and is within your price range, then you should be able to find an option to suit you.

The 500 series has 12 different models, namely:

For quick reference, the following is what each number and letter signifies in the names.

O.k. let?s check out each guitar and what makes it different to the other guitars in the line.

Starting with the first of the dreadnought models, we have the 510e.

Featuring solid mahogany back and sides, the main factor that is the same with all the guitars in this series, the guitars in this line are naturally warm sounding and have more emphasis on the mid-range. This is more or less so, depending on the top that they are paired with.

This guitar and others in this series, also feature a slightly shortened 24 7/8? (632mm) scale length ? this allows for less string tension, which makes this guitar easier on the fingers and easier to perform techniques such as bends.

There are a few differences between this model and the 510e. The major ones are as follows:

The 512ce 12-Fret is naturally the same as the 512ce with the major difference being that the neck joins the body at the 12th fret instead of the 14th fret.

Moving onto the Grand Auditorium model.

The two main differences between this and the 512ce is that the 514ce:

This is the second dreadnought option. Compared with the 510e, the major differences are:

Apart from a small difference in the stain/sunburst used, this is otherwise identical to the 510e ? but that Tropical Mahogany top will make a significant difference to the tone.

Like the 520e, the 522ce features a Tropical Mahogany top but it?s other features are more like the 512ce, being a Grand Concert and featuring a Venetian Cutaway.

As you can probably guess, this is the 12-Fret version of the 522ce.

See the notes on the 512ce 12-Fret for more on what difference this will make.

This is of course the same as the 522ce except without the cutaway.

If you prefer not to have a cutaway, this is the option for you ? and you save a few dollars as well.

This is the Grand Symphony model of the 522ce.

There are also some aesthetic differences.

The 552ce is the Cedar topped option. It has a Grand Concert shape.

Apart from the fact that it?s a 12 string it most closely resembles the 512ce, the major differences being:

This is virtually a carbon copy of the 552ce, with the one major difference being the Mahogany top in place of the Cedar top on the 552ce.

So, there you have a brief overview of the guitars in Taylor?s 500 series. Have you played any of these guitars? What did you think of the guitar(s) in this series that you played? Feel free to leave a comment in the comments section below.