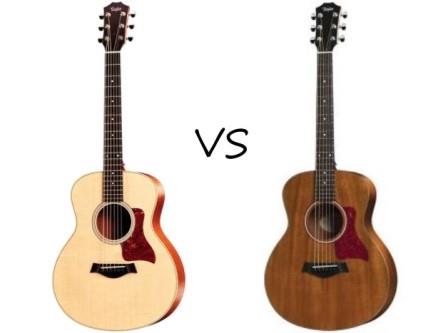 A while ago I reviewed the Taylor GS Mini mahogany model – and was genuinely blown away by it.

Contents hide
1 The Difference between the Taylor GS Mini and the GS Mini Mahogany
1.1 The Things that Are the Same
1.2 The Playability Differences
1.3 The Tonal Differences
1.4 The Tonal Similarities
1.5 The Other Options in the GS Mini Line-Up
1.6 Who are These Guitars Best Suited to?
1.6.1 Final Thoughts
1.6.2 Learn More and Where to Buy

There is literally only one difference between these two models.

So, what a great way to test between a guitar with a mahogany top and a spruce top.

The Things that Are the Same

Let’s take a look at the things that are the same just to illustrate how similar these guitars are besides their top.

And these are just some of the things. Literally everything else is the same.

These two guitars play exactly the same. Which is that they play nicely, IMO. I really enjoyed playing both of these guitars (they are one in the same playability-wise).

The space in the higher frets became a bit of tight squeeze for my fingers, due to the shorter scale length, but overall just really easy and nice to play.

The differences were, to my ear anyway, about what you would expect them to be when comparing spruce and mahogany.

The GS Mini Mahogany has a narrower range of tone. It has a warmer tone than the GS Mini and expresses more emphasis on the mid range and has less range/clarity in the high-end and low-end.

But all of this is very subtle. Both guitars are quite warm sounding and really at the middle range between bright and warm – with the GS Mini Mahogany being on the warmer side of middle and the GS Mini probably smack in the middle.

If you wanted to go for something a little brighter, then the GS Mini-e RW (with laminate Rosewood back and sides) would give you a bit more brightness/clarity in the lows and highs – if that’s the thing you’re going for.

Both of these guitars pack a punch for their size.

They produce a tone significantly louder than what I was expecting for the size. And they are super responsive to even the lightest touch (which I would expect from this size of guitar).

And, as I eluded to above – they are both hovering around the mid-point when it comes to being bright or warm. They’re similar – with the Spruce version being slightly brighter. If there was a brightness scale from 1 to 10 with 1 being the warmest and 10 being the brightest I would say this:

The Other Options in the GS Mini Line-Up

The GS Mini line-up now has 7 different models. Those being:

Who are These Guitars Best Suited to?

These guitars are great for a number of different people.

I’m a man who loves mahogany – so if I had to choose between these 2 it would be the GS Mini Mahogany. It’s got such a nice warm balanced tone, heavy on the mid-range (which I like) but still has a kick to it and is very responsive to a light touch.

But which one you think is better really comes down to personal preference and, like I said above, they are only really subtly different in tone.

Learn More and Where to Buy

If you wan to learn more about the GS Mini or GS Mini Mahogany, or are ready to buy or want to research availability and pricing (guitars usually come in at less than their MSRP), check out the links below.

If you want to check out my review of the Taylor GS Mini Mahogany, check out the next link.