You are here: Home » The Basic Guitar Chords For Beginners and How to Play Them The following basic guitar chords for beginners will form the foundation of your chords. Learning these chords and their shapes will help you in learning many other guitar chords.

Not only that, there are also hundreds of songs you can learn that involve just these basic open guitar chords.

The first part of this post will explain how to read guitar chord charts and then move onto playing the actual guitar chords.

The guitar chords that will be covered in this post are.

Imagine a guitar leaning against the wall. This is the view of the chord chart. Where there are fingers on the strings there is neither an ?x? nor an ?o?. You should always strum these strings.

This might be confusing for some at first, especially if you’re not still sure about guitar string names, but you will get used to these diagrams and they will get easier to read fairly quickly.

For the E Major chord I will go through and explain how it is to be played. For the remaining  guitar chords I will just show the diagram because the diagram will describe what you should be doing.

If in doubt refer back to the ?Getting Ready? charts above. As per the diagram above you should: Very similar to the E Major chord – you just have to lift off your 1st finger.

The A Major Chord To get the best sound possible you want to get your fingers as close to the front edge of the fret as you can. Because you have 3 fingers all trying to fit into the 2nd fret for the A major chord some people find it easier to have the first finger on the G string to try to get it closer to the edge of the fret.

Note that you aren?t going to be able to get all 3 fingers right to the front of the fret whichever way you do it. Just try to get that 1st finger somewhere in the middle and not right to the back of the fret.

You?ll know what I mean when you try the chord.

The A minor Chord 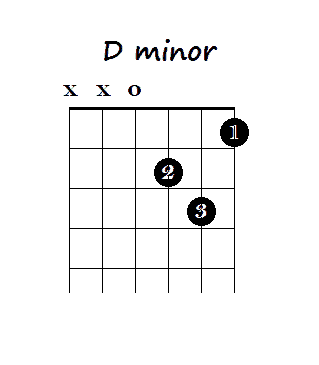 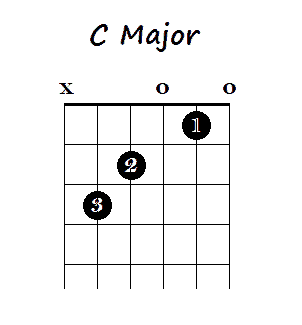 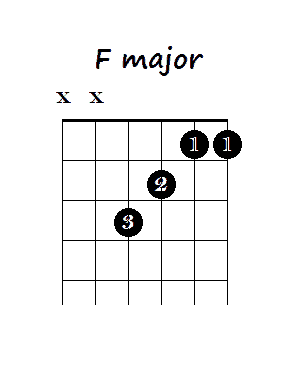 The F chord is perhaps the most difficult of the open guitar chords in this list.

You need to bar both the B and high E strings with your first finger and you also need to make sure you miss both the Low E and A strings as you strum.

How I like to play this chord is to mute the Low E string with my thumb (bringing it over the neck of the guitar) and to mute the A string with the tip of my third finger but this might be too difficult to start with – so you can start out just making sure you miss the Low E and A strings as you strum.

Over to you now. The more you practice the more natural these guitar chords become.

You should also practice transitioning between the different guitar chords.

For more guitar chords plus video lessons on how to play them and some good techniques on how to transition it?s a good idea to check out some online video lessons. Check out my online lesson reviews in the menu above.

There are both free and paid lesson reviews there.

If you are going to go for paid lessons the best that I?ve seen so far is Jamplay.

If you have any questions or comments about the guitar chords in this post please feel free to leave a comment in the comments section below.