You are here: Home » How to Transpose Guitar Chords Easy?

We’ve all been in a situation where for whatever reason the chords have simply needed changing. And if you haven’t, chances are that if you have any interest in performing in a group at any point you will be required to do so.

What can otherwise seem scarily theoretical is rendered child’s play on a guitar. The sameness of the fretboard, the very sameness that can appear daunting and off-putting, where none of the frets seem to have their own identity though some are littered with strange crepuscular dots, works to the guitarist’s advantage with the right know-how.

Structured as the fretboard is like some sort of ceaseless series of rows in a corn field, we are able to impose upon it whatever logic we so wish. In this spirit it becomes elementary to transpose guitar chords, and soon you will doubtless feel inclined to agree.

We may come to need to transpose guitar chords for a whole host of reasons, not only for reasons of musicality, but also for more practical causes that affect a piece of music’s playability. Below are outlined a few, though this is by no means an exhaustive list, and you ought not to be deterred if your reason for feeling inclined to transpose guitar chords is nowhere here present.

Follow your intuition and discretion and remember that your path is individual and ought always to be treated as such.

Sometimes things just don’t sound right. A cluster of harmonies grouped together in one chord can sound muddy or bunched together on a guitar, where it might otherwise sound perfectly fine when resonating from the keys of a piano. The timbre has much to do with this too – the way an instrument literally sounds, its tonal qualities and what makes it sound uniquely itself. The fact that all instruments have differing timbres, however slight, makes the need to transpose guitar chords a very real one.

This is made exponentially more urgent by the guitar’s musical transposability: its inherent adaptability to so many different musical contexts, so vital as it is in countless genres and styles of music, make the guitar more susceptible to the need for transposition than most other instruments. Thus, what might sound absolutely fine in one context of a song is rendered undesirable in another.

This might be of particular relevance with Jazz music, where there is such a culture of covering other people’s songs, sometimes to a point of reinvention where it is unrecognisable as the original song. As the guitar is so present a force in jazz music across all of its various offshoots and subgenres, this makes transposition a more than common occurrence in its presence within the music, so translated and redigested as the canon of jazz standard becomes with each successive generation of aspiring musicians seeking to assert themselves, simultaneously reinventing the music for all of those soon to come.

More often the need or desire to transpose guitar chords arises for more practical reasons. These are wide ranging and multitudinous, there being theoretically no end to how we might need to adapt as musicians to certain musical contexts on the fly.

However multitudinous these instances might possibly be, it is likely they are simply for the sake of an instrument’s range. A vocalist, endowed as they might be with a low or high range, might be unable to acclimatise themselves to the range of a certain song, unable as the case may be to comfortably reach the higher or lower notes within the song respectively.

The same is possible for a wind, horn, or brass instrument, all of which are transposing instruments themselves. This means that whatever note they may play on their instrument will by name be different to that of standard tuning, owing to their needing to be tuned overall to a certain pitch. This is most often Bb or A, for the case of the practical concerns of the instrument, its holes and pipes etc.

Thus, the responsibility for transposition will fall on instruments like the guitar or the piano, the accompaniment instruments for whom the action of transposition is far easier than for those horns or flutes etc, whose very structure makes this act of transposition a far more difficult, mathematical process. In the context of a band just wanting to play some songs through without too much snag on time and effort, it simply makes sense for the piano or guitar to bear the brunt of this transposition, particularly as they are almost certainly going to be the main source of harmonic backing during a piece of music, even if later on the guitar might go on to solo or such like.

So, below I will be outlining two tried and tested methods to transpose any guitar chords you might come across and need to rework, for any of the reasons listed above or for some that are perhaps more unique to you.

The first will be decidedly simpler at first, though I would argue that once you have fully grappled with the second you will be able to implement both just as easily, the second all the more admirably for not requiring a piece of equipment to do almost precisely what the first does with this very piece of equipment.

Both, however, will be capitalising largely on the logic inherent in the guitar’s fretboard where, for all the frets visual sameness and seeming incomprehensibility to begin with, we are able to move any shape wherever we want, up or down the fretboard, providing there are enough frets in the direction we are heading of course!

Transposing with a Capo

This simpler option will find favour with those more inclined towards open chord shapes, capable as this method is of instantaneously modifying the overall tuning of the guitar without any need to adjust the tuning itself. Affixing a capo to the guitar’s neck works much in the same that a barre chord does, modifying the overall pitch of the guitar in order to preserve the sanctity and relevance of those open chord shapes which, in the case of actual barre chords, are often rooted on the E and A string and accompanying shapes.

Transposing guitar chords in this way serves an incalculable number of purposes, though can often be found in folk music styles, where the guitarist is often simultaneously the vocalist, rendering quick transposition to other chord shapes across the entirety of the neck an encumbrance when seeking to focus more on vocal melody than guitar accompaniment.

Find a video of someone on YouTube playing a folk song and if they’re using transposed chords, chances are they are doing so with a capo. This serves another purpose for folk, a genre inclined more towards alternative tunings for more expansive solo accompaniment. Unless completely comfortable in said tunings, transposing the chords of a song on the fly would be rendered more difficult, thus the situation calls loudly for a capo to simplify things.

If you’re having trouble visualising this, it might be better illustrated with an example, in the key of C major to Eb major:

So, in this instance if we were to want our first chord to be Eb, then the whole sequence, like the first going up three frets, would also ascend three frets. And because we are using the C major open chord, we place the capo on the third fret, so that this same open chord’s root is on the Eb of the A string. 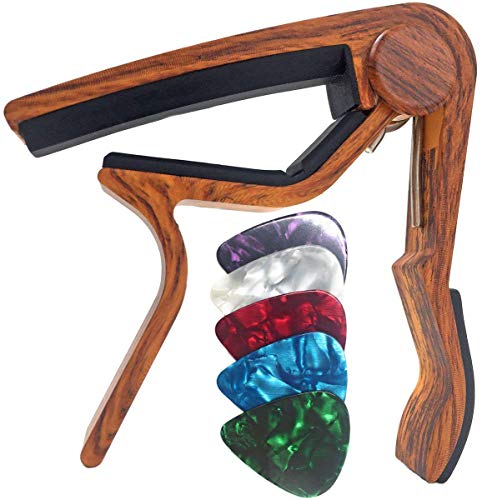 Prices pulled from the Amazon Product Advertising API on:

Product prices and availability are accurate as of the date/time indicated and are subject to change. Any price and availability information displayed on [relevant Amazon Site(s), as applicable] at the time of purchase will apply to the purchase of this product.

This method uses precisely the same logic, though with the added benefit of being able to modify the placement of the chords dependent on your own personal comfort. As this will require slightly more of your theoretical self at first, we will take this one step by step:

As with before, this will be better illustrated with an example, again from the key of C major to Eb major:

You ought to be able to see from this diagram of all of the notes used in each sequence that these two seemingly different chord sequences are in fact entirely related, their inner logic simply transposed as it is up three frets.

Equipped as you have been with these vital methods, I would hope you are feeling more confident in yourself and your abilities to transpose guitar chords. Once you have found something to hold on to in the more theoretical side, you will no doubt be able to ‘transpose’ this knowledge to more meaningful contexts, using these skills to learn and relearn your favorite songs in different keys, and to reinvent with yourself and other band members the very fabric of music itself!

What does it mean to transpose chords?

The word transpose simply means ‘to change key’. So, if we were to transpose guitar chords, whether of themselves or in the larger sequence of a song, we would be modifying the original key of the chords up or down in pitch, for whatever reason.

How do you transpose guitar chords?

Transposing guitar chords is a process, often begun with mapping out the root notes which, once collated, will be constructed into a shape that best fits the new intended key. Unlike other transposing instruments, doing so on a guitar is relatively simple, often as easy as moving chord shapes and chord relations up a corresponding number of frets.

How do you change chords from one key to another?

Once you know the original key of the chords and the desired key, it would be best to work out the root note of the first chord of each, and then to work out how many frets up or down there in between the two. From here, their harmonic relationship should be fairly obvious, and you ought to be able to transpose and move the original chords up or down the fretboard accordingly.

How do you transpose to a new key?

Knowing the original key of the song is a vital first step, which will typically be followed by working out the desired new key. After this, you will seek to work out the harmonic relationship between the two, usually by mapping out the root notes of the first chords of each sequence, and analysing the difference in frets between the two. Finally, you will adjust the original chord sequence up or down accordingly with these calculations.