You are here: Home » What are the Different Acoustic Guitar Body Types

Deciding on an acoustic guitar involves a number of things – and one of those things is getting the body shape that will be best suited to your purposes.

Don’t worry I won’t be going into every single shape in the image above – just the more common types – just thought that was a pretty appropriate image for this post!

There are a number of things that influence the tonality, volume and playability of a guitar. The shape of the guitar influences all three of these.

Below I will cover the following shapes.

I have used these names for ease of reference but there are different names for different shapes depending on the manufacturer. Below I have tried to include some of the terms used for both Martin and Taylor guitars. Other shapes from other guitar companies might be slightly different but should be relatively similar to these.

First let?s make the distinction between ?classical? guitars and ?acoustic? guitars. Some of the shapes outlined below are quite similar to the classical guitar shape.

There is a big difference though. Classical guitars have nylon strings and are built to be played with Nylon strings. There are shape varieties within the classical guitar category but these tend to be subtle.

Note in the picture to the left?that the classical guitar?s strings are tied onto the bridge (and notice the bridge pins for the other shapes below).

The Dreadnought shape is perhaps the most popular acoustic guitar shape.

The shape is defined by a very large soundboard that has an ?un-curvy? shape. That is to say that it has a wide, less defined waist than other acoustic shapes giving it a squarer look.

Because of the large soundboard dreadnoughts produce a louder sound. They also produce a more boomy kind of?sound than the other shapes.

Dreadoughts are very popular for rock?& bluegrass. So it?s no wonder they are the most popular shape today. They are predominantly used for flat-picking and strumming and not as much for fingerstyle playing but you can definitely use it for that too – it’s just not as suited to that as some other shapes.

Light Touch or Aggressive?: Because of the larger size?it takes a bit more oomph to get the soundboard to vibrate. So if you play with a light touch you won’t get as much volume or clarity out of it. However, it has a high volume ceiling – meaning that you can play it with a heavy hand or strum it hard and it will play louder without distorting, compared?with some other shapes. This is best for those with a more aggressive style.

In terms of playability dreadnoughts can be harder to hold and therefore harder to play, and less enjoyable to play for smaller people and beginners. However the necks do tend to be quite narrow meaning it?s easier for smaller hands (but harder for finger picking). 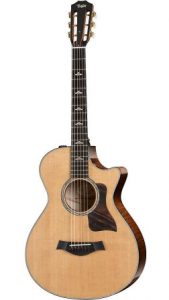 The concert guitar (a.k.a. “0” for Martin Guitars)?is a smaller bodied guitar and usually has a lower bout width of around 13 1/2 inches (34cms).

There are also grand concerts (“00” for Marin?Guitars (more common than the standard concert) which have a lower bout width of around 14 inches (36cms).

It has a smaller soundboard so produces a quieter sound. But it also produces a more rounded tone. It is less bass heavy than the dreadnought and the narrower waist width helps to add more definition to the sound.

These guitars are great for playing fingerstyle. You can still strum and flat-pick with them for sure but they are at their best when used for fingerpicking.

These shapes are also easier for smaller musicians to play. They can also feel more comfortable playing sitting down than the dreadnought due to the more rounded shape. 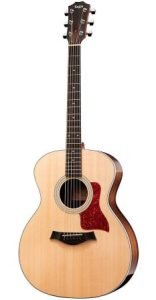 Size-wise these body types are in between the Dreadnought and the Concert – typically with a 15 inch (38cm) width at the lower bout (roughly but they vary quite a bit).?They are generally quite similar in shape to the concert style but just with that larger lower bout.

A Grand Auditorium has rouhly the same lower bout dimensions and body length as a dreadnought but has a narrower waist so the overall body size is smaller.

They achieve a great balance between volume, tone and playability.

Light Touch or Aggressive?: These guitar shapes – sometimes referred to as medium sized guitars – are the great all-rounders. They respond to a light touch better than the likes of a dreadnought but not as well as a Concert. They have a volume ceiling that is higher than a Concert but not as high as a dreadnought. So this is a great option if you like to switch between playing with a light touch and playing aggressively.

This size/shape is also the great all-rounder in the fact that it’s equally as good for playing finger-style, strumming and flat-picking.

Next to Dreadnoughts these are the most popular acoustics today. It is a great all-rounder for playing a variety of styles.

Synonymous as the cowboy guitar due to its popularity with country and rock-a-billy artists in the 1940?s and 1950?s, the Jumbo acoustic is the largest acoustic guitar shape.

They can be up to 17 inches (43cms) at the lower bout. Size-wise they rival the dreadnought but shape wise they are more like the Grand Auditorium – though that large lower bout does give it a distinctive shape.

Jumbo?s are great for strumming and produce a lot of volume. This can be great for around the campfire.

Light Touch or Aggressive?: These definitely need a bit of oomph to get them to sing – but the volume ceiling is very high so you can really give it some without any distorting of the top. Definitely best for more aggressive type playing – they’re particularly good strummers.

Not as?common these days but you can still find them.

These are essentially smaller sized versions of the some of the shapes above. They can take on more of a dreadnought shape or more of a grand auditorium shape.

They are perfect for smaller musicians and those who want a guitar they can easily travel with.

Acoustic guitars can also come with a top (soundboard) that is arched or flat. Whilst flat tops are far and away the most common shaped top on a guitar you can still find plenty of options for an archtop.

Archtops are mostly used by Jazz players but are used by other styles from time to time.

What’s the Best Shape for You?

Of course guitar shapes don?t fall exactly within these dimensions and there are variations on the ?standard? shapes.

What shape you go with will depend on your physical size, your playing style, your?tonal preferences and your genre preferences.

It?s a good idea to try out some different shapes to see which ones you prefer in terms of playability, response, volume and tone.

What shape do you prefer? Let me know in the comments below. Any other questions or comments also very welcome.

Top Photo by Larry Jacobsen [CC BY 2.0], via Flikr