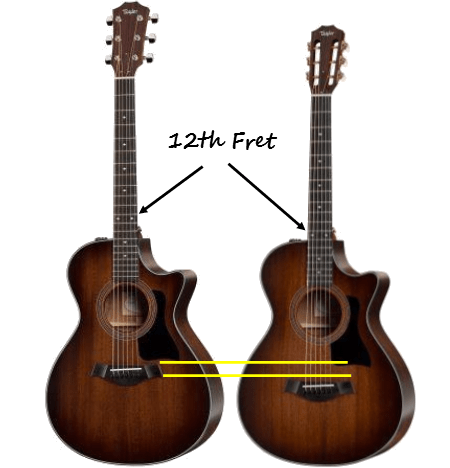 Once upon a time a guitar wouldn?t have been anything different from the norm if it was a 12-fret guitar – because they used to be the norm – they are now rarer.

A 12-fret guitar is simply a guitar where the body of the guitar joins the neck at the 12th fret.

Most modern acoustic guitars join at the 14th fret.

Does this actually make any difference?

How a 12-Fret Guitar Differs from a 14-fret Guitar?

There are a couple of differences that a 12-fret guitar brings. Firstly, there are usually fewer frets – usually 18 as opposed to 20 on a 14-fret guitar.

But probably the biggest difference is the position of the bridge on a 12-fret compared to a 14-fret.

The bridge on a 12-fret is further from the soundhole. The scale length is normally the same and the bridge is moved down lower on the?top of the guitar.

How does this affect Sound?

This has a significant effect on the sound of the guitar because the bridge sits on a more flexible area of the soundboard and can move more freely.

The result is usually a warmer tone that doesn?t quite have the attack in the highs or the thump in the lows that you would expect from a more modern steel string guitar. It has a softer, warmer tone.

It also helps to produce more sustain and a less compressed kind of sound. So you can get a bigger kind of sound out of a smaller guitar in that sense.

How does this affect Feel?

I like to think of this as a bit of a looser feel. You get a smoother freer kind of feeling. Everything?s a bit more flexible.

It makes it easier to bend strings and fingerstyle feels particularly good. There is less tension going on so it?s a bit of an easier feel on your fingers compared to the 14-fret counterparts.

That all completely depends on you. It depends on how you like to play and the sound you like.

If you like to do a lot of hard strumming and explosive flat-picking type stuff, then a 12-fret probably isn?t going to be your thing – you?re probably not going to get as much oomph out of it as you would like.

On the other hand if you like to play fingerstyle and prefer a softer, looser feel – then you?ll probably wonder why you hadn?t played a 12-fret sooner. It could be a revolution for you.

Also, if you like a warmer, more subtle kind of sound, then you?ll love the 12-fret.

If you?re after a brighter, louder, more compressed kind of sound, then you probably won?t be suited to 12-fret.

12-Fret guitars are making somewhat of renaissance of late. They were the only option before the 1930s but 14-fret acoustics soon took over, leaving the 12-fret as a bit of an ancient relic for years.

But more and more musicians are going back to 12-fret models for their unique musicality and feel.

They?re not for everyone – but if you?ve been searching for a sound and feel that you just can?t quite seem to get, maybe try a 12-fret – it might just be the revelation you?re looking for.