You are here: Home » What Is A Grand Auditorium Guitar and Who Is Most Suited to This Type of Guitar? 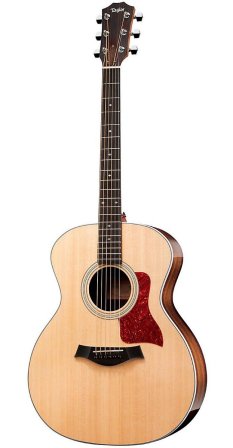 You may have heard the term and often wondered ?what is a grand auditorium guitar??

You might, like me, have conjured images of a grandiose instrument that bellows out in massive concert halls?.or have I just got an overactive imagination! In actual fact The Grand Auditorium guitar is a versatile mid-sized guitar.

The Grand Auditorium is a steel-strung acoustic and it?s normally a flat top guitar, but could come with archtop or other specialized versions. The guitar is traditionally made from different varieties of tonewoods.

The Size of the Grand Auditorium (GA) Guitar

The GA falls between the Dreadnought and the Grand Concert in terms of size.

The larger sized Dreadnought guitar is popular for flatpicking and strumming and the Grand Concert is usually more for the fingerstylist. The Grand Auditorium delivers on both.

The Grand Auditorium is big enough to handle strumming and has a well-balanced tone. It has a body length of 20 inches, maximum depth of 4 ? inches and a maximum width of 16 inches.

The Shape of the GA

Who the GA is Most Suited to

The musician who wants a single guitar to travel with finds the Grand Auditorium a good choice. The tone is great for strumming and/or picking. It performs well on stage and in the studio.

The GA is also very popular with songwriters (and singers) as they can do more with this single and do not have to work with several instruments.

Here are a few things to consider when choosing the Grand Auditorium guitar:

The GA produces a big and clear sound.

There is no general price for this type of guitar.

The prices of this acoustic guitar vary depending on the materials (types of wood used for the top, the back and sides, neck, fingerboard and bridge and other materials such as for the bracing, the nut and saddle and the tuning pegs) and the quality of manufacturing techniques.

The top guitar manufacturers across the globe have their own version of the Grand Auditorium Guitar and there are some varieties in the size shape and manufacturing of each.

Taylor claims to have been the original producer of the Grand Auditorium in the 1990?s. Taylor has not been around as long as Martin and Martin has a model that could arguably fit the specs of a Grand Auditorium which they made decades before Taylor?s. Regardless, all the big players in the field have perfected their version of this guitar.

Some Final Thoughts on the GA

A lot of musicians, writers and singers would agree the Grand Auditorium is a guitar everyone should have. Even if you own multiple guitars, the GA is one that you will reach for more often than not.

Many big names in the music industry play the Grand Auditorium Guitar.

For the strummer, picker, fingerstylist, performer or casual player; the Grand Auditorium is one guitar every musician should own. You can check out some reviews of GAs that I’ve done at the link below.
>>Grand Auditorium Acoustic Guitar Reviews