If you are in the market for a new guitar, your first guitar, or even looking to custom build, you may be wondering about the best wood for acoustic guitars.

This is going to depend on the tone you desire and how much money you can/are willing to spend on the guitar.

Why the Wood Matters

The wood that is used to create a guitar makes a huge difference to the sounds that the guitar will produce.

There are many influences on the sound of the guitar (body shape, bracing, strings, bridge saddle etc), but the type of wood used is one of the most influential.

The wood on any one guitar could be different for the top (soundboard) of the body, back and sides of the body, the neck, the fretboard, bracing, the bridge & the headstock.

The fretboard and neck wood can have some affect on tonal quality but is unlikely to be noticeable.

What Wood for What part of the Guitar?

What you go for will depend on your budget, your personal tonal preferences and the style of music you like to play.

Out of all of the wood on the guitar the soundboard makes the most difference to the sound.

The sound produced by the strings of the guitar is transferred through the bridge onto the soundboard (the top) and is amplified by the top as it vibrates. This is why the larger the soundboard the louder the guitar will be (but that’s about the shape and not the wood so let’s get back on topic :-)).

You can see then why the soundboard is so important. The cheapest top option: The cheapest option for the soundboard is to use laminate wood. Whilst this is great on the budget, it won’t be quite as nice on the ears!

Laminate wood is made by bonding several thin layers of wood together. Usually there is a higher quality layer on the top and cheaper layers underneath. Laminate wood does not make for the best tone, especially for tops.

If you are on a serious budget then this could be an option but I would avoid it at least for the soundboard if you can – often you can pick up something cheap that has a solid top but laminate back and sides.

Cedar: Cedar is a bright sounding wood option, though produces a warmer tone than spruce (the most common top wood – see below), when used as a top.

This is often used on classical guitars but also sometimes on steel string acoustics.

Koa: Koa is a pricier wood as it’s less common. This is one of those woods that sounds better with time. A guitar with a Koa soundboard will start out life with a very bright sound. But as it ages (the more it is played) it will mellow out and become richer and warmer sounding and show more emphasis toward mid range tones. 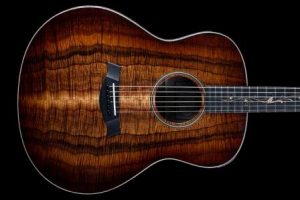 Koa, in my opinion, looks amazing – but that of course is in the eye of the beholder. 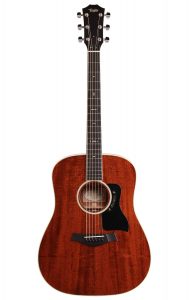 Mahogany: Mahogany is a dense wood and gives a ‘slower response rate’ – don’t ask me what that means in scientific terms!  But what it does mean in practical terms is that it produces a strong/meaty mid range sound with more subtle overtones (a very ‘non-abrasive’ sound) which leads to an ‘earthy’ ‘mid-rangy’ sound.

They are also great in situation where you are playing with other instruments. The strong sound produced is easier to hear in a multi instrumental environment.

Whilst it is more commonly used in the back and sides (see below) it also makes for a great top if it suits what you are playing. 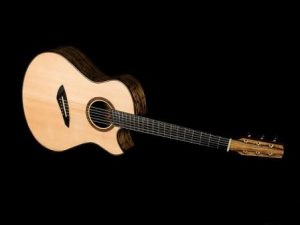 It is characterized by it’s light colour and often looks great contrasted against darker colored back and sides tonewoods.

Sitka Spruce is a great all round soundboard material and responds well to both aggressive playing and more subtle playing. Spruce has a wide dynamic range and resonates well with a wide range of tones.

This all round ability is most likely the reason it is so common as a soundboard material.

Adirondack Spruce is another variety of spruce that is great for soundboards. The advantage of Adirondack is it’s dynamic tonal range and the ability to play loud without losing clarity of sound.

This soundboard is great for guitarists who like to play aggressively.

Engelmann and European Spruce are also used for soundboards – this is great for those with a softer touch as it responds well to that soft touch – it doesn’t sound as good when you play aggressively.

Back and sides of the body

The back and sides of the guitar are important tonally and can really compliment the sound that is created through the top.

Koa: In addition to being a great soundboard material Koa is also great for the back and sides. It goes great with a Koa top. Again this wood sounds better with age and is typically found on more high end guitars. 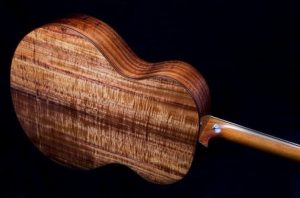 Mahogany: Mahogany is great for the backs and sides of a guitar as it has a great mid range character. It can enhance the mid range tones and add meatiness/thickness to the sound. If this is what you after, then this is a great wood option for you.

As with using Mahogany as a top, it is great for blues as back and sides – but combined with other tops it can work well with a large range of different styles.

Maple: Maple works well in the back and sides of the body if the guitar because it has a ‘low response rate’, a bit like Mahogany. And, like Mahogany this means that it has fewer overtones which leads to notes having a quick decay (less resonance – dies off quicker).

This means it complements the sound of the top without messing with it too much.

This is a great wood for those playing in a band situation, or with other instruments in general, as it does well to cut through  in the mix so it is heard and also because of the quick decay of sounds it is less prone to feedback issues.

Unlike Mahogany though, Maple has more emphasis on higher notes and brings ‘focus’ to individual notes.

This also helps in the band situation and makes it appealing to lead players who are looking for note definition.

Maple is a very light coloured wood. When used as back and sides it is sometimes stained to produce a darker color – particularly when used with a spruce top to add contrast.

Rosewood: Rosewood is a very popular wood for guitars and has been used a lot traditionally too. 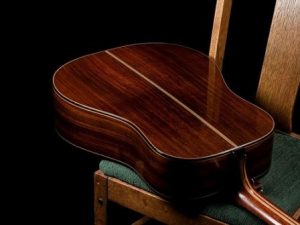 Very different to Maple, Rosewood has a ‘high response rate’. It has great mid-range like Mahogany but also expands well into the high-end tones and low-end tones, producing deep bass notes and bright treble notes.

Goes well with bluegrass players looking for that punch in both the low end and high end – but it’s very versatile and will go well with a lot styles depending on the top. It is also accommodating for finger-picking, flat-picking and strumming.

Rosewood has rich overtones and that high response rate allows for a sharp attack into the note and a lot of resonance. It is probably not ideal in a band setting because it might be prone to feedback issues.

Rosewood back and sides with a Sitka Spruce top is sometimes referred to as the “Holy Grail” of tonewoods as some people consider this the best combination you can have – personally I think tone tastes are individual.

Walnut: Walnut has some of the qualities of Koa in that it changes its tonal character with time. The low end will start out deeper and fill in the more it is played.  It has a bright top end like Koa but stronger mid tones coming through.

It is said to have mid range qualities somewhere in between Mahogany and Rosewood.

If you paired Walnut back and sides with a Cedar top and a smaller guitar this would be great for finger-style. If you paired it with a Spruce top and a larger guitar it would be bolder and more aggressive for strummers and flat-pickers.

Sapele: Sapele is similar to Mahogany but there are some subtle differences.

>>Learn more about the differences between Sapele and Mahogany here

The best woods for fretboards are rosewood and ebony. Check out the link below for a more in depth discussion about fretboard woods.

What is the Best Guitar Fretboard Wood?

The neck of the acoustic guitar is usually made from Mahogany, particularly with steel string guitars and often Spanish Cedar for Nylon string guitars. Maple is also common though more common in electric guitars than acoustics.

Learn more about the wood for necks here

Thanks for reading and I hope you now are a lot more educated on the different types of wood that can make up an acoustic guitar and what sounds those woods will create and the styles each wood is best suited for.

Knowing the different characteristic of woods now, would this influence your decision in buying your next guitar? Let me know what you think in the comments below. All other comments or questions very welcome also.