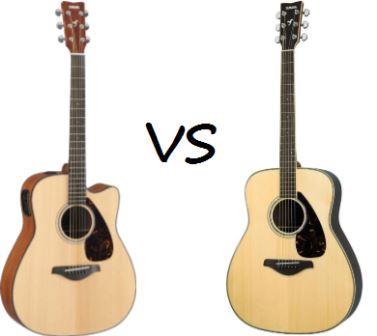 The short answer is that they are the same thing except that one has built in electronics and one doesn’t.

There are a couple of other things?but there are more similarities than differences. Read on to learn more.

First let?s take a look at what they have in common and then we can see their differences.

Acoustics and electric acoustics are pretty much the same except for one thing. Let?s see what?s the same about them and how they both differ to electric guitars. 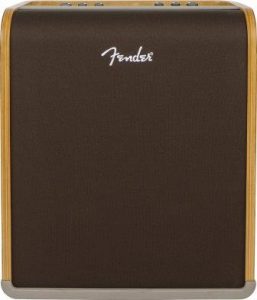 Both acoustics and electric-acoustics can be played acoustically – that is to say that they don?t need to be amplified to play them.

An electric guitar won?t produce much sound if it?s not plugged in because it has a solid body and no way for sound to resonate.

Usually an acoustic guitar unplugged will have enough volume to accompany someone singing. It won?t drown out the singer but you can still hear it when someone is singing along to it.

An electric guitar on the other hand would be too quiet to accompany a singer. It would also be too dull, and not have the resonance to sound good without amplification.

Being essentially the same instrument except for one thing – acoustics and acoustic-electrics use the same type of strings.

Electric guitars on the other hand have their own type of string.

If you want to learn more about choosing the best strings for your acoustic guitar check out the link below.

An acoustic and an electric-acoustic can be made of exactly the same materials and often they are.

O.k. so essentially the two are exactly the same except for a couple of things. 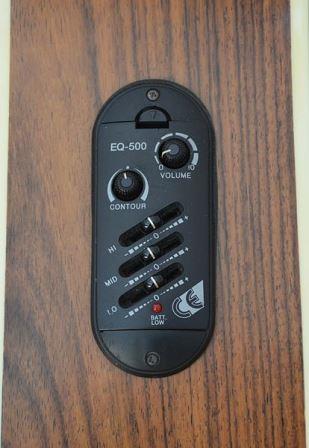 Electric acoustics come with a built in pre-amp and input.

This means that you can plug a lead into that electric-acoustic, just as you would with an electric guitar, and play it through an amplifier. Or you can plug it in for recording if you weren?t using mics or didn?t have recording mics available.

Electric-acoustics also typically have a built-in EQ and volume control that you can adjust from your guitar.

There are amps that are especially designed to be used with acoustic-electric guitars – so typically you wouldn?t plug into an electric guitar amp but you can.

The other distinguishing feature which is often, but not always present, is that electric-acoustics usually have a cutaway in the body of the guitar. You can compare a guitar with a cutaway and without in the image below. 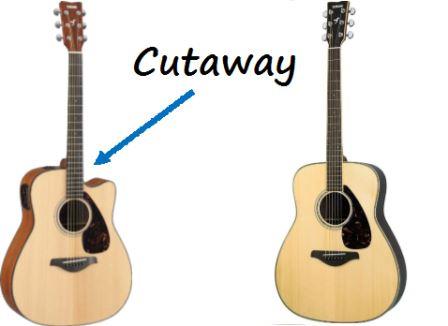 Acoustic guitars that don?t have in-built electronics typically don?t have cutaways. You can find them but they are the exception to the rule.

Part of the reason for this is that a cutaway can change the character of the sound and it can also serve to reduce volume and resonance.

Of course, the advantage of a cutaway is that it gives you easier access to the higher frets on the guitar.

O.k. so we?ve taken a look at all of the similarities and differences between acoustic guitars and acoustic electric guitars.

We?ve seen that electric-acoustics are more similar to acoustic guitars than they are to electric guitars. In fact they are basically the same thing with just a couple of differences: 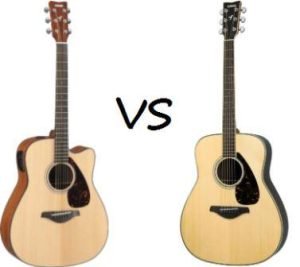 Often manufacturers make the same guitar as an acoustic and as an electric acoustic. Everything else on the guitar is usually the same except that one has built in electronics and often a cutaway.

Hopefully you are now more familiar with the differences between acoustic and electric-acoustic guitars.

Both acoustic and electric acoustic guitars are reviewed on this site. Check out the link below to browse the reviews.
>>SixStringAcoustic.com?s Acoustic Guitar Reviews<<