You are here: Home » Yamaha APX500ii Review: Acoustics Under $300 Reviews Hello and welcome to my yamaha APX500ii review. This review is part of my acoustics under 300 series of reviews.

I will cover the following aspecs of the APX500ii

I was actually pleasantly surprised with the sound of the APX500ii considering the price.

I wasn?t surprised with the quality of sound considering it was Yamaha though. They are one of the best at producing decent sounding guitars for reasonable prices.

It is a smaller bodied guitar but it produced a louder, more dynamic tone than the full-sized dreadnought I tried in the same session (The Fender CD-60). It had a great kick for its size and there was some decent bass but the mids and highs is where this guitar excels – and there’s some great tonal definition between bass, mids and highs, especially for the price.

The APX500ii has a unique shape but I would say it?s between a grand auditorium and a concert shape/size but it also has a narrower body depth.

This first video isn?t in English but it gives you an idea of the sound when he?s playing it.

And here?s another one 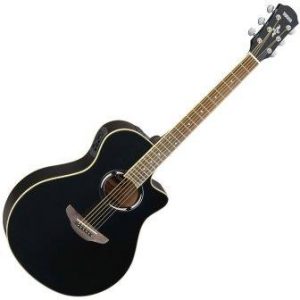 The biggest let down for me with this guitar was how it played. Though I?ve heard other reviews say that this guitar is nice to play I found it laboursome to play. This was probably largely down to the action being too high.

Everyone has their own preference in terms of action. For me this was significantly too high for my tastes and made the guitar physically and technically difficult to play.

But others prefer higher actions – either way you can get this adjusted to suit your tastes.

The nut width is 43mm (1.69?). This is narrow enough for small hands but not so narrow that string spacing becomes difficult. The right nut width for this guitar in my opinion.

The fretboard is made from rosewood so no complaints there.

The APX500ii has a scale length of 634mm (25?). This is slightly shorter than the 25.5? you would normally get on a full size dreadnought acoustic. This is great for anyone that likes their frets slightly closer together.

The APX500ii is a great low cost option for playing live with – the shallow depth of the body makes it an easy shape to deal with on stage and the sound is really suited to live playing.

I think it would also be a decent beginner guitar if the action was lowered but you would definitely need to lower the action to give it to a beginner – otherwise it would be too difficult to play and become frustrating for a beginner.

Otherwise it would definitely also work as a sit at home and play guitar if you?re looking for a smaller bodied guitar with a slightly shorter scale length.

Yamaha?s 500 series are one of the world?s highest selling guitars (maybe the highest).

So they are definitely rated by a lot of guitarists.

You definitely get a quality of sound that belies its $300 price tag. Get that action lowered and it should be a nice guitar to play too. So I wouldn?t definitely say this is a value for money instrument. 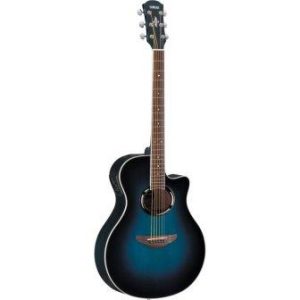 I hope you found this review helpful.

If you are interested in this guitar check out the links below.

If you want to check out reviews for some other guitars in this price range check out the link below.
>>Guitar?s Under 300 reviews