Hello and welcome to my Yamaha LL6 review – a part of my acoustic guitars under 1,000 review series.

As is custom here at SixStringAcoustic.com I will be following the following format for the review:

Contents hide
1 Tonal Qualities
1.1 Materials Used in Construction
1.2 Check out some videos to hear the sound for yourself
2 Playability
2.1 Best Suited to
2.2 Value-for-Money
2.3 Compared to other Guitars in the price range
2.4 More Info and Where to Buy

The LL6 is part of the L series. The particular model I played was the LL6 ARE (the ARE stands for acoustic resonance enhancement).

I found the LL6ARE to have quite a bright but at the same time?full sounding tone. It was balanced and had that driving volume and sound you would expect out of a jumbo.

Though it has also been intentionally?designed to emphasize the mid range and high range (to be more suitable for playing in a group situation) and you could certainly tell the mid to high range emphasis when playing it.

This guitar has no cutaway which, in my experience, does contribute to a fuller sounding guitar- even though it can affect your playing if you like easier access to the higher frets.

It is said to be slightly richer and warmer and a lot of players prefer it for finger picking over Sitka.

The LL6 is treated with Yamaha?s acoustic resonance enhancement (ARE) which is said to age the wood as if it had been played for years so that you can get that played in sound straight out of the box.

Back & Sides: The LL6ARE back and sides are made from laminate rosewood (or laminate Mahogany if you go for the LL6M ARE).

This is typical at this price level and you would expect to pay a bit more to get solid back & sides.

What bugs me though is the way that Yamaha aren?t very transparent about this. I initially thought this guitar had solid back and sides until I investigated further. In the specs on their websites and on a bunch of other reviews that I have seen they just call the back and sides rosewood, which I take to mean solid. But then I discovered it was laminate and then realised that in their specs it will say solid rosewood when it?s solid but won?t specify when it?s laminate. I find this a bit deceiving but that?s just my two cents. Rant over!

Neck: The neck is made from mahogany and rosewood. Both great neck materials.

Bridge: The bridge is made from rosewood – rosewood is a great choice for the bridge.

Like with the laminate back and sides Yamaha just aren?t very clear with this at all in their specs. They seem to be hiding this (and I couldn?t find this on other reviews either – I?m terrible at being able to tell in person what mateials nuts and saddles are made of when I?m looking!).

The LL6 ARE is definitely a decent guitar so I don?t see why they are trying to hide this stuff.? O.k. rant definitely over now!

Check out some videos to hear the sound for yourself

This first video is just over a minute but should give you a good idea of the sound.

This second video is a little longer if you?d like to hear more.

I found it took?a reasonable effort to bend and vibrato when I was playing the LL6. However, this probably had as much to do with the strings as anything else but the action is likely to also have contributed to this.

Action: The action was higher than I would have it. I would have this lowered if I were to buy this guitar. But that?s my personal preference.

It did feel like it had a larger curve in the neck than the A1M and certainly more than the Martin GPCPA5K that I played in the same session – which wasn?t really a problem either but may not be as comfortable for anyone with smaller hands.

Fretboard (fingerboard): The fretboard is made from rosewood. Pretty standard and no complaints with how the fretboard felt.

Quite suitable for playing in a group where a bass instrument is present. The focus, particularly on the new models, is on the mid range and high end range -?the?emphasis of this guitar is definitely to the higher end of the tonal spectrum. So it you play in a group this might be a great choice.

With a slightly more mellow tone than the likes of the A1M and other models I think this guitar would suit folk well?- but it certainly isn?t restricted to folk alone and depending on your style and sound preferences it could cover a wide range of styles.

Whilst it’s not a no go for players with smaller hands, the slightly chunkier neck might not feel as nice to play as others in a similar price range with narrower necks and flatter neck profiles.

Typically speaking Engelmann Spruce tops are great for players with a softer touch – so you have a more subtle, softer style then the Engelmann will up the projection for you. Not as good for more aggressive players – the sound can?lose some definition when played too aggressively.

I?m going to say yes and no for this one. I think a lot of people will disagree with me on this one?but, I think they could fork out for non-plastic nut, saddle and bridge pins so that the buyer doesn?t have to fork out to?upgrade these parts?and go to the effort of replacing them.

Also, whilst the sound was fuller and nicer (remembering that this is somewhat?subjective) than the Yamaha A1M I played, it didn?t play as nicely or, in my opinion, sound as nice as the Martin GPCPA5K that I also played in that session.

I’d say it’s?about right for the price (assuming you can get it for $600 or less) but I’d say no more than that.

If you have no issues with changing the hardware and lowering the action I think you’d then get a superb guitar for the price.

So yes – definitely value for money if you are willing to do a couple of things to it, but no if you want to just play it straight off the shelf.

Compared to other Guitars in the price range

It should of course be remembered that this will partly come down to personal preference and, as you can probably see in the user reviews in the links above, a lot of people really like this guitar. 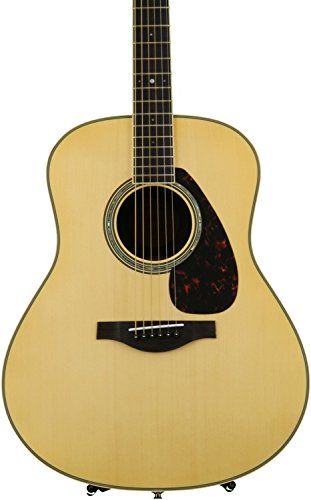 If you want to learn more about the Yamaha LL6, are ready to buy or if you want to research prices and availability, check out the links below.

Thanks for reading and I hope you have found this review useful.

If you want to check out some other options under 1,000 or want to compare the Yamaha LL6?to others in this price range, check out my top 5 acoustics under 1,000 at the link below.
>>Top 5 Acoustic Guitars Under 1,000